In Jonathan Levine’s Long Shot, Seth Rogen gets to live out what we can presume is his lifelong dream of sleeping with Charlize Theron. Unfortunately we can’t say the same for Theron, who gets to endure every woman’s worst nightmare of Seth Rogen threatening to screw up the world’s best chance at a female President.

That’s essentially the plot of Long Shot, a film that takes the much-needed male perspective on a woman’s ascent to the highest office in America. It’s of course meant to be a comedy, and there’s enough laughs along the way to prove that thesis, but for a film that attempts to say a lot about politics and female empowerment it fails to add much substance to the current discourse.

The premise isn’t bad for a romantic comedy, although it does take a while to get there. Rogen plays Fred Flarsky, a risk-taking journalist who quits his job when his local newspaper is bought out by Rupert Murdoch-esque mogul Parker Wembley (despicably depicted by Andy Serkis). When his rich mate Lance (O’Shea Jackson Jr.) takes him to a charity gala to brighten his mood and burden the film with more exposition, Fred reunites with his childhood babysitter-cum-Secretary of State Charlotte Field (Theron).

This is the combination we all paid money to see, one that publicists of the film have been spruiking at all costs. But while the chemistry between unlikely partners Theron and Rogen is there, it’s a bit overstated; Fred spends most time with Charlotte gushing over his childhood crush, whereas she gains ‘chemistry’ points simply by looking pretty. 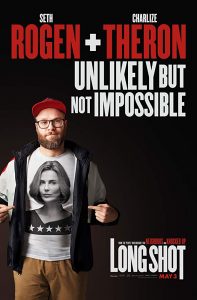 As we observe the pair get closer – Fred as her speechwriter and Charlotte as his boss – writers Dan Sterling and Liz Hannah pivot between humouring Fred’s fantasy and making us feel anxious about the implications this relationship has on Charlotte’s reputation and, by extension, Presidential chances. The high stakes provide the platform for potentially great comedy, but Sterling and Hannah waste the opportunity by making their leads too inconsistent and the narrative unfolding around them too dramatic.

In one scene, the lowly Fred throws a hissy fit and threatens to derail the most significant moment of Charlotte’s career out of his own self-righteousness; in another, Sterling and Hannah literally throw a bomb at their leads to make them throw their arms around each other. What they fail to realise is that the premise alone – the fact that a leading presidential candidate is falling for a stoner with a boner – is enough ammunition to play with. Where they let this play out, there’s great fun to be had, as we witness in one memorable sketch where Charlotte lets her hair down in Paris.

Sterling and Hannah’s biggest problem is that they are fooled into thinking this is Fred’s movie. For a film that offers some strong feminist commentary via its satire of news media and its portrayal of a strong and likeable female political leader, it falls at the last hurdle by telling the story through Fred’s eyes rather than Charlotte’s. From the opening scene, we learn so much about Fred and what he stands for, but are not given the same level of access about Charlotte until he is around.

Being a film about politics, Long Shot naturally manages to win a few laughs from its political jibes, none better than its decision to cast Bob Odenkirk as the President of the USA. Odenkirk is unfortunately underused, as are most of the supporting cast. Maggie Millikin (June Diane Raphael) and Tom (Ravi Patel), Charlotte’s other two staffers, are seldom given moments to shine, making them largely unlikeable or unforgettable characters.

Long Shot doesn’t always miss the mark, but nor does it generate enough laughs or enough heart to raise itself above your standard romantic comedy. Its promising premise and likeable leads are unfortunately wasted on a clunky script that fails to read the tone of a country.

Long Shot is in cinemas from 2nd May through Studiocanal.

Written By
Kevin Hawkins
More from Kevin Hawkins
Given the superlative title of Chris Wedge's Epic, it would be apt for...
Read More