After its near death experience in 2008 the financial industry under Wall St has gone back to conjuring money from nothing. Stocks and commodities are now traded over the internet, meaning that firms with the fastest internet speeds win every time. Starting around 2012, the current financial dark art is latency trading. If a major firm adjusts the price of a stock a computer algorithm will sell as soon as the price increases or buy it when it goes down. It only earns around $10 a transaction – but it happens around fifty times a second. Stretch this out over a year and some firms make profits over half a billion dollars. It takes around 150,000 microseconds for a finger to click a mouse – high frequency trading does it in 17; one flap of a hummingbird’s wing.

The latest film by Kim Nguyen takes us into this labyrinthine world. Cousins Vincent (Jesse Eisenberg) and Anton (Alexander Skarsgård) are two of the office drones hanging around one of the latency trading firms run by Salma Hayek’s tyrannical CEO. While Vincent, or Vinnie as he’s known, seems to be the leader, Anton is clearly the brains of the operation who might be a touch on the spectrum. Their plan is simple but it isn’t going to be easy – quit the firm and lay a new fibre-optic cable 2000kms from Kansas straight to New Jersey. It will take a year and cost millions but at the end of it they’ll be one millisecond faster than everyone else, an edge that will make them rich beyond their dreams.

The Hummingbird Project is a strange film in many ways. In one scene it’s an exposition of the filthy greed inherent to Wall St and then in the next scene we’re supposed to root for our main characters who are indulging in the exact same vice. It feels exactly like the many ‘Based on a true story’ biopics that warns us of where we’re heading, the kind that have information flash up before the credits to put ice in our spine, and yet it isn’t. The fact that it’s fictitious comes as a bizarre discovery. What the exact point of this endeavour was remains a mystery. 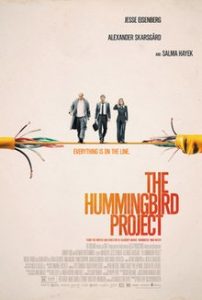 What saves it from obscurity are the performances and Nguyen’s script. Although Jesse Eisenberg has a range limited to variations on his Mark Zuckerberg persona he leads with flair. We’ve never seen Alexander Skarsgård quite like this, bespectacled with half his hair missing. Anton is the emotional heart to the film and Skarsgård has never been better. For a man that played a sexy German in a collection of knitted jumpers last week to this shows what a versatile actor he’s becoming.

Although the motive for it all remains elusive, the script has enough interesting ideas to give these characters some memorable discussions. It works on humanising these people, which was needed in a film that veers so frequently into esoteric ideas. It does occasionally overstep the mark, like with Salma Hayek’s CEO who feels like a villain who escapes from one of the lesser known Bond films.

The main problem is that this isn’t a cinematic premise. An interesting film can be made of any subject – Eisenberg’s aforementioned Social Network is proof – but in the absence of any memorable filmmaking this ends up being about people burying wire so they can do their online shopping one millisecond faster.

The way Wall Street operates can’t continue indefinitely. Look back nine years to 2010 where this high frequency trading led to the little known “Flash Crash” where one trillion dollars vanished from the market and then reappeared 36 minutes later. Expert traders (a.k.a the people running the world economy) still aren’t certain what caused it. While it’s unclear what the original intention was and what exactly it’s trying to say, The Hummingbird Project is a damning portrait of the current world economy. This isn’t an industry based on the science of economics which aims to allocate resources, this is global robbery on a scale beyond anything seen before. Nguyen’s achievement is to put a human face on this remarkably warped set of affairs.

The Hummingbird Project is in cinemas from 25th April through Madman Films.

Written By
Simon Storey
More from Simon Storey
An old filmmaking adage says that you should never work with children...
Read More