Is there anything those New Zealanders can’t do? From inspirational Prime Ministers to legitimate claims over Sam Neill, our Kiwi friends always seem to find a way of one-upping those of us on the other side of the Tasman.

Aussies who can’t deal with another New Zealand achievement may prefer to avoid Soldiers Without Guns, Will Watson’s documentary on the ground-breaking role the New Zealand government played in instilling peace between Bougainville and Papua New Guinea during the late 1990s. As the film’s title suggests, the New Zealand peacekeepers favoured guitars over arms in their approach, attempting to build trust and peace in the region through proverbially ‘soft’ tactics.

Australia gets credit where it’s due, namely through the decisions made by former Foreign Minister Alexander Downer, however one can’t tell the story of Bougainville’s conflicts without speaking first of Australia’s short-sighted decision to build a copper mine in Bougainville territory, an Australian colony between 1946 and 1975. 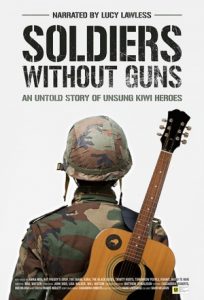 For audiences unfamiliar with this Pacific conflict, Soldiers Without Guns does well to re-tell the story in a clear way. Talking heads from Bougainville, Papua New Guinea, New Zealand and Australia take up the majority of screen time, but Watson matches this with an impressive collection of stock footage from the civil war, some of which makes for confronting viewing.

The result is a documentary that wouldn’t look out of place on something like Australian Story, whereby journalistic integrity and intimate storytelling take precedence over stylistic flourishes. It’s a suitable format for a story that needs to be recorded and remembered, albeit one that lacks the mainstream appeal of other documentaries. This is partly due to the niche subject area; Watson seldom ventures beyond the Pacific to explore the implications of this conflict and the subsequent peacekeeping mission on the rest of the world.

Despite juggling a range of perspectives in presenting this complex civil war, Watson is focused in his direction and makes his contention clear. That is, that Bougainville’s present-day peace can be attributed to the strength and courage of Bougainville women and New Zealand’s unique approach to international relations.

The latter point is more effectively conveyed than the former, but Watson is careful not to let Soldiers Without Guns fall into a white man’s burden narrative. Indeed, he should be commended for the way he constructs a narrative that both plays into patriotic pride but isn’t shy about critiquing colonialism, Western ideals and capitalist notions of resource exploitation. With screenings starting ANZAC Day, it will be interesting to see what kind of response this film gets from this nation’s varied ideological pockets.

Soldiers Without Guns screens at selected cinemas from 24th April through Demand Film.

Written By
Kevin Hawkins
More from Kevin Hawkins
From the comfort of Australia it’s easy to roll our eyes about...
Read More