As the thirty year cycle of nostalgia plunges us deeper into the 1980s, American-Malaysian director Yen Tan goes back to the Christmas of 1985. Shot on Kodak film in gorgeous black and white photography, Tan has delivered a subtle and heartbreaking look back at the decade’s most notorious health crisis.

Set in Fort Worth, Texas, Adrian (Cory Michael Smith) returns from living in New York for Christmas. His family seems altogether normal; devoutly christian, middle class in middle America. His Vietnam vet father (Michael Chiklis) works long hours at a repair shop to make ends meet for Adrian’s mother (Virginia Madsen) and little brother (Aiden Langford). It’s clear that Adrian hasn’t kept up contact since moving to the other side of the country. Now he’s home there seems to be a lot of things lurking below the surface, secrets left unsaid as unsolved trauma lingers. As Adrian hands out Christmas presents that he shouldn’t be able to afford and old friendships fray it’s clear a terrible knowledge rests on his shoulders that will soon change them all.

Beautifully shot and acted, Yen Tan’s ode to the lost generation of gay men is refined filmmaking at its best. There’s a wonderful new batch of LGBT cinema coming out all around the world. As the stigma slowly fades and people’s stories are being told this is one of the best of the current crop. Tan, who moved to the USA in the mid nineties and seems to have an eye for little details, has created the kind of film that gets big results from small hints.

As an openly gay man he grasps how profoundly sad this subject matter is, instead of pressing it on the audience he simply lets us watch and feel it ourselves. It’s a great working partnership with the cinematographer known simply as Hutch, who also produced and co-wrote the screenplay. 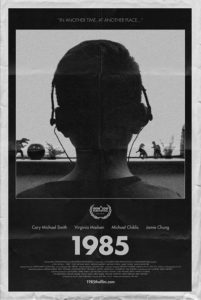 Instead of going down the obvious route of being about homophobia, we’re shown the bonds of family love. Michael Chiklis has never been better as Adrian’s stern father, a proud Reagan/Bush supporter who isn’t above dabbling in a bit of Christian fundamentalism. Virginia Madsen, who was so wonderful in Sideways, shares the best scene of a parent and child conversation since Call Me By Your Name. It’s cinema about the best in a terrible situation, warming the viewer’s heart before breaking it.

Cinema that addresses the AIDS crisis is nothing new, yet in recent years the focus seems to have shifted to how the powers that be handled it at the time. Despite the medical community having known about it for years, to the point that over five thousand people had died from it, Reagan first mentioned AIDS publicly in September 1985. In 1982, when asked about it, the White House press secretary made a joke and claimed to have not heard of it. This is probably due to the fact that it wasn’t called “AIDS” at the time; in common parlance it was known as “Gay Plague”.

Now recognised as a pandemic, the 2015 documentary Chemsex presents the current crisis in London with shocking clarity, AIDS is at the very least controllable in large parts of the world (at time of writing two people look like they’ve been cured through bone marrow transplants, indicating a cure might be available in the not-too-distant future). Whether the delay in response in the 1980s was due to underlying homophobia or because authorities simply didn’t grasp just how serious it was, the fact remains that several administrations stood idly by while swathes of the gay community rotted from the inside out. 1985 is the story of one of these men, and a good one too.

There isn’t any blame here, simply people doing their best in terrible circumstances and trying not to hurt anyone. Presented without sentimentality and with the utmost grace, 1985 is the calling card of a fantastically talented filmmaker, a subtle but powerful tribute to a lost generation of young gay men.

1985 is in cinemas from 25th April through Icon Film Distribution.

Written By
Simon Storey
More from Simon Storey
Romanian director Cristian Mungiu has only made five feature films, but in...
Read More