In the town of Merced, California a small but growing sisterhood of like-minded nuns has formed. They’re the Sisters of the Valley, in the business of aiding those in pain with a miraculous cure for everything from epilepsy seizures to cancer treatment. Helping the less fortunate is their claim. Homegrown, medical strength cannabis is their game. Documentary maker Robert Ryan brings ganja, nuns, big guns and illicit funds to the screen in Breaking Habits. It’s rad.

We follow Christine Meeusen, or ‘Sister Kate’ as she’s now known, through the strange world of California’s dying war on drugs. Los Angeles or San Francisco are a world away from Merced, one of the poorest areas in the state. Before she started at this unique sisterhood Christine was a corporate executive, earning seven figure salaries while her husband of seventeen years took care of her three children. It seemed like a perfectly normal life, traveling and living the American Dream until betrayal of a rare magnitude came her way. Her husband wasn’t just cheating on her, he was a polygamist with a secret family who had siphoned off one million dollars from her bank account.

He left her penniless with three children to take care of.  Her life seemed irreparable before she discovered the lucrative business of cannabis farming, rediscovered herself spiritually on the way – for this reason the fact it’s not titled “A Higher Calling” seems a missed opportunity.

This is a fun tale about an extraordinary woman that doesn’t go as deeply into this topic as it should have. The fact that it’s about nuns growing weed means it’s worth watching – it will likely have repeat screenings on SBS Viceland soon – but with such fertile ground to harvest from it seems like we’re getting a lot of surface level ideas. 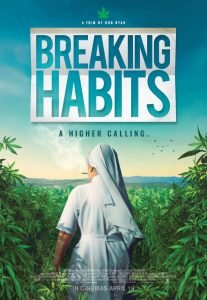 What Ryan does perfectly is address the stunning oversights of the War on Drugs. Started officially in 1971 by the Nixon administration with the hopes of tackling the the illicit drugs trade, it has left behind a sordid history of political corruption, violence and ever more potent drugs. It has torn apart the fabric of Latin America and put a generation of young black men in US prisons. This has to be the greatest failure in the history of public policy.

With the hopes of putting up both sides of the argument Ryan includes interviews with policemen, who couldn’t have been cast better in a Hollywood blockbuster. The county sheriff, sporting a cowboy hat and handlebar moustache, brings up every logically unsound talking point imaginable. A scriptwriter would be called a hack if he wrote a character like this. When asked about THC’s effect of helping those going through chemotherapy, one of the cops replies ‘most of those with cancer who smoke marijuana end up dying anyway’.

Sister Kate and her family make for interesting leads. Her son has a blunt in his hand in almost every scene he’s in and the tales of him camping out with an assault rifle to protect the crop from Black Market bandits are jaw dropping. Yet it’s also revealed that he became a drug addict barely into his 20s. The documentary doesn’t dwell on this too much but it seems like a massive oversight not to explore it; surely that’s something worth delving into in a film about illegal drug production.

The prohibition on cannabis remains one of the most Byzantine laws in the world. As Portugal and Canada have proved: treating drug addiction as a health issue rather than a criminal one works. Society can never eliminate drug use so reducing the harm it can do should be our goal. In the years to come the war on drugs will have volumes written about its failures and inconsistencies but for the moment a film about enlightened nuns growing weed will suffice. Breaking Habits is a fun watch that, unlike the drug it’s about, doesn’t tax the brain too much. If cinemas don’t have screenings at 4:20 in the afternoon they’re missing a treat.

Breaking Habits is in cinemas from 18th April through Icon Film Distribution.

Written By
Simon Storey
More from Simon Storey
Written and directed by Sally Potter, The Party is a black and...
Read More