Thunder Road is a deeply humanistic film. Starring, directed and written by Jim Cummings, it focuses on a man – who is a son, a husband, and a father – whose relationships in these roles are all undergoing profound change. He struggles to remain emotionally resilient and to find his best self in the face of loss, both past and potential. It is written, performed and directed with open-hearted empathy and, seemingly contradictorily, tragi-comically grounded realism.

As such, Thunder Road announces Cummings as an enormously promising talent – someone with the astute sensitivity, both behind and in front of the camera, to craft complex characters and tell touching stories.

Police officer Jim Arnaud (Cummings) is going through a tough time. The film opens with his mother’s funeral, where Jim is called upon to say a few words to remember her. His attempts to remain composed as he shares memories, confesses regrets, and unsuccessfully tries to sing Bruce Springsteen’s ‘Thunder Road’ in tribute are moving, awkward and yet evocatively relatable. This tonally varied scene sets the tenor for the rest of the film. Afterwards, we learn about the other key relationships in his life: his wife Rosalind (Jocelyn DeBoer) and their messy divorce, their daughter Crystal (Kendal Farr) and his persistent efforts to become closer to her, and his police officer partner Nate Lewis (Nican Robinson), whose stable family life he is, on some perhaps only semi-conscious level, envious of. These current pressures are compounded by unconfronted and unprocessed sorrow, which, in time, overwhelm his ability to cope. 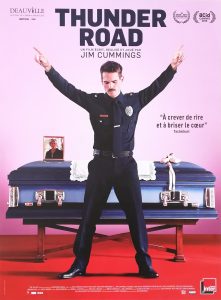 Without a doubt, the film’s success must be attributed to Cummings’ deft and sensitive approach. His screenplay, performance and direction are thoughtful, perceptive and layered. His Jim is caring and fair, but the stress brought about by his mother’s passing, his impending divorce and the ensuing child custody battle render him emotionally fragile, at times woefully so. His performance is captivating, at times even startlingly so. There are several times when we can see psychological cracks appear so suddenly, and moods change so swiftly, that they seem to catch Jim (Arnaud), and even (Jim) Cummings, by surprise. But this is only evidence of Cummings’ in-depth and instinctive awareness of the nuances of his character’s unpredictable vulnerability and compromised coping mechanisms. Perhaps ironically, Jim’s reactions only seem so spur-of-the-moment genuine because of Cummings’ complete creative control.

But Cummings also strikes up generous rapport with the other characters, especially with Crystal and Nate. Whether learning to play a hand clapping game with his daughter or being invited to a family dinner at his friend’s house, his interactions with these characters are, by turns, affectionate, awkward and hilarious — all grounded by an undeniable authenticity. With a warmth and understanding that permeates all of these relationships, Cummings manages to find that humour and sadness are both present in many of life’s little moments.

Thunder Road is an affecting and immensely empathetic portrayal of someone coping with grief and struggling to forge ahead — and, ultimately, contains much that should resonate with all of us.

Thunder Road is in cinemas from 18th April through Rialto Distribution.