This is the second year in a row that the Spanish Film Festival has announced itself by previewing a Maribel Verdu-led black comedy, and you can understand why after last year’s dose of the bizarre. In 2018 it was the highly original Abracadabra where Verdu played a jaded housewife trying to un-hypnotise her deadbeat husband after he was inhabited by the ghost of a serial killer. Comparably this year’s Crime Wave — a madcap crime comedy of sex, murder, lies, corruption and taking advantage of your son’s intellectually challenged best friend, from director Gracia Querejeta and writer Luis Marías — might sound rather tame, but nonetheless promising on face value. And while Querejeta and Marías are not afraid to go over the top and stack up the body count, Crime Wave is always, like its central plot, a half-baked caper.

Leyre (Verdu), a single mother about to be made destitute by her ex-husband Cosme (Luis Tosar), is left in the lurch when their teenage son Asier (Asier Rikarte) kills him in an angry outburst. You might expect a chaotic scene of screams and scrambling for towels. But no. No-one is particularly sad about the body on the floor. Shocked maybe. Inconvenienced definitely. ‘One less moron,’ as Leyre’s mother says. And she has a point. Cosme had left Leyre and Asier to marry a younger woman and was in the process of evicting them from the house he’d left them. Leyre sees no option but to cover their tracks, but these two are not bright and their ineptitude shows with each attempt to keep the police away; once one crime is committed, you’re going to have to commit a whole lot more to get away with it. But they do have an advantage: Cosme was also a corrupt CEO of a company that is now desperate to keep the investigation away from its own backyard of bribes and deceit, making the question for the police less ‘Who would kill him?’ and more ‘Who wouldn’t?’ 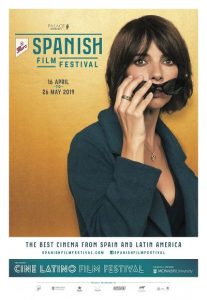 Determined to be gaudy and bawdy at the expense of character, this romp through the streets of Bilbao is certainly vibrant and willing to go to some provocative places, but clearly production didn’t bother to venture far beyond that aspiration. Starting with a damaged Leyre daring to confess to a priest more bothered with the pitfalls of smartphones than any obligation to comfort his flock, Crime Wave sets the tone early and often: do first, ask forgiveness later. But with so much attention paid to distracting the audience with colour, corporate sass, a quick-fire succession of throwaway gags and a leering lens, you might suspect the director is trying to hide something. It may be plausibility. It may be restraint. It may be a sense for nuance. It might even be Frank Gehry’s Guggenheim building that I found myself hoping to see for lack of better entertainment elsewhere on the screen. Who knows? There’s a lot missing. There is the semblance of a promising plot here, and an experienced lead in Verdu who does her level best to rescue it, but Crime Wave is sadly never able to reconcile the many balls it tries to juggle in the escalating farce.

Death is just decoration to the flagrantly despicable lives of its cast of characters, and while this brand of vaudeville black comedy has been handled well elsewhere, here the slapstick is uninspired, the pantomime soundtrack is brash and insistent and the wink-wink nudge-nudge provocation seems merely tacky. Perhaps there is something to be said for the comic timing and surprise that is lost with mistimed subtitling. And if you were feeling generous, you might even call this a commentary on the world today—that it is a senseless world populated by self-interested idiots just trying to get along—or a critique on everything from the death of marriage to casual racism, but… no, that is too generous. We get it, it’s fluff, it’s gleefully immoral Sunday night popcorn fodder that and meant to be consumed as such, but shop around; there are better films out there and, importantly, much better options at the Spanish Film Festival.

Crime Wave screens as part of the Moro Spanish Film Festival which runs from 18th April to 8th May.

Written By
Angus Tonkin
More from Angus Tonkin
Regardless of your views on the horse racing industry, Michelle Payne’s story...
Read More