Maggie Gyllenhaal stars as Lisa Spinelli in The Kindergarten Teacher, a story of poetry, obsession and projection on a very personal and uncomfortable level.

Lisa is a free thinker, drawn to creativity in a world which doesn’t reward such passions. Despite her appreciation for all things poetic she herself is struggling to create good work at her weekly poetry classes. When, in her role as a kindergarten teacher, she overhears one of her students muttering in metrical and figurative language she latches on to his prose, determined to capture and nourish that talent, and the student who comes with it.

That student is Jimmy (Parker Sevak). He is quiet, withdrawn and seemingly unexceptional. He unlocks something inside of Lisa that she is desperately craving, facilitating a creative outlet. The only problem is not everyone in Jimmy’s life is super keen on him becoming a Mozart of poetry. His businessman father is happy to have a gifted child but isn’t sold on the benefits of a future entwined with writing. His relatively young nanny finds his little stanzas a quirky talent but is not willing to engage his gift on a level Lisa would like. 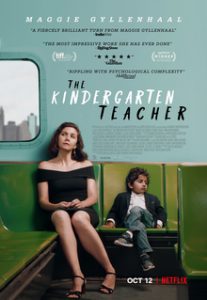 As for his gift – well, poetry is an art that’s almost impossible to apply a qualitative metric. His poetry is certainly evocative; simple powerful words and imagery often evoking colours. Initially Lisa plagiarises these poems at her night classes. There they are met with high acclaim from her peers and teacher confirming to her his talent.

Yet rebuke after rebuke follows Lisa’s drive to portray his poetry, which further escalates her obsessive determination. By degrees her behaviour crosses from altruistic desire to help a student to inappropriate projection onto such a young child. It starts with Lisa putting her own personal number into his mobile phone, letting him know not to tell any other adults about this, and becomes progressively alarming. The film slowly turns into a character essay on obsession and projection. Despite no sexual connotations, the film comes with a cloudy uneasy feeling surrounding the teacher child relationship. It’s a societal transgression that like Jimmy’s poetry is hard to quantify, and fascinating and uncomfortable to watch unravel.

One of the many interesting facets between Jimmy and Lisa is the power dynamic which Lisa chooses not to directly exploit. It’s a film highly internalised, and Maggie, with her sad, emotive eyes that suck you into the rest of her face, is perfectly cast to bring life to such an nuanced role. Much the same way she illuminated to us the inner workings of a sadist in the excellent sadomasochistic film Secretary she does so again this time shedding light on an ugly facet of our humanity, amplified by obsession.

This is a film which demands close attention be paid at all times. Despite having a focused and narrow topic to speak on the film isn’t entirely perfect. Plenty of the relationships between Lisa and others around her aren’t fleshed out entirely or feel unnatural. It’s as if things have been left on the cutting room floor regarding Lisa’s relationship to her family and her own poetry teacher (Gael Garcia Bernal does well enough in an imperfectly written role). Even the relationship between Jimmy and Lisa is a little off. It could be to demonstrate how alienated Lisa feels in the external world, but regardless the result is a nagging feeling something is off within an otherwise quite interesting film. It’s a slow burn, and at a pithy 96 minutes, well worth it.

The Kindergarten Teacher is in cinemas from 11th April through Madman Films.

Written By
Ben Isbel
More from Ben Isbel
The film opens in black and white on a secluded beach at...
Read More