Five months after the Nazi Empire surrendered to the Allies, Hamburg is the skeleton of a city. The promise of the Thousand Year Reich barely lasted twelve, bringing with it a level of destruction and suffering unprecedented in the history of human endeavour. Six years of war and the coordinated fury of Allied bombing resulted, in the memorable words of Christopher Hitchens, in “hardly one brick standing upon another from one end of Germany and Austria to the next”.

This is the setting for The Aftermath, James Kent’s latest film since 2014’s Testament of Youth, the latest in the everlasting cinematic fascination with the Second World War. Rather than looking at the war itself, it’s most concerned, as the title suggests, with what happened afterwards. In the winter of 1946 Rachel (Keira Knightley) arrives in Hamburg to be with her husband (Jason Clarke), a British army colonel tasked with restoring order in a city where bodies are still being found in the rubble. To her surprise she isn’t staying in the city, she’s going to the country manor of a rich Hamburg family, one of the many acquisitions in the British zone of occupation.

Unfortunately for her the house isn’t empty; her husband has decided to share with the the previous owners: Alexander Skarsgård and his daughter (Flora Thiemann). With post-war trauma a factor in everyone’s life and frequently left alone in the house, a romance blossoms between Rachel and the German man she’s been taught to despise. 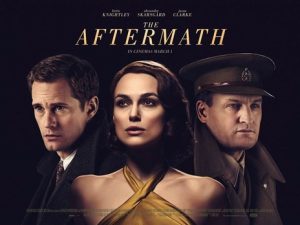 Based on a novel by Rhidian Brook, The Aftermath is a well made but familiar look at this period of history. The setting is one of the few remarkable things, everything else is either pushed to the sidelines or ignored. An officer’s wife falling into a love triangle with the enemy; we’ve seen this story play out hundreds of times before – usually with more passion and a more engaging take on material.

We spend the film with Rachel and she’s the least interesting thing about it. After losing a son in the war she’s in the throes of grief so her mood for most of the film is like the weather: cold and dark. I haven’t read Brook’s novel but I’m guessing that this story would work a lot better on the page, as so much of it is concerned with internalised grief as Rachel tries to mentally rebuild herself while trying not to swoon every time Alexander Skarsgård in a woollen coat enters the room – a challenge by anyone’s standards. It’s the Keira Knightley performance we all know. Her upper class accent peeps out dialogue about love and loss while putting those high cheekbones to good use and sporting some excellent period dresses.

How could anyone go through World War 2 and go back to a regular life, knowing the depths of depravity? Was Bomber Command’s controversial decision to target German civilians – many of whom were refugees fleeing the mass rapes of the Red Army – justifiable? How could Germany rebuild itself when an entire population, the young in particular,  had been brainwashed for twelve years by a party of fanatic racists? These are all good questions, none of which are addressed with a modicum of interest by a film more concerned with Keira Knightley playing piano than the infinitely more substantive things around her. It’s remarkable just how unremarkable it is.

This is the surface level, three star, inoffensive period drama it looks like. Not a bad film, but rather one for a lazy Sunday afternoon. Enjoy it with a cup of tea, then forget about it immediately afterwards.

The Aftermath is in cinemas from 11th April through 20th Century Fox.

Written By
Simon Storey
More from Simon Storey
Films about mental illness aren't the easiest things to make. There are...
Read More