In the last few years horror films have developed a fascination with parental anxiety. Perhaps it’s the reality of climate change sparking fear about the world that the children of today will inherit. Maybe it’s feminism reevaluating the role of mothers, so women speaking out about their anxiety or unwillingness to have children isn’t such a taboo subject anymore. Creepy kids are nothing new – The Exorcist mastered it back in 1973 – but The Babadook, Under the Shadow and Hereditary indicate that creepy children and paranoid parents are back in filmmakers’ minds.

Coming to us from Ireland, The Hole in the Ground is writer/director Lee Cronin’s first feature film and the latest in the parental anxiety sub-genre. Sarah (Seána Kerslake) and her young son Christopher (James Quinn Markey) have recently moved into a new town and are living in a home on the edge of the woods. The reason for the move isn’t clear, but a deep scar on Sarah’s forehead and her unwillingness to talk about Christopher’s father indicate that the insidious grip of domestic violence isn’t far away.

The titular hole in the ground is in the middle of the woods. It’s massive, like a comet has struck the earth and opened up a sinkhole that could swallow a Mac truck. When Sarah discovers it she begins to think that Christopher has fallen in. “Do you ever look at your kinds and not recognise them?” she asks her boss. As paranoia grows she begins to fear her little boy. Something monstrous is living under her roof. 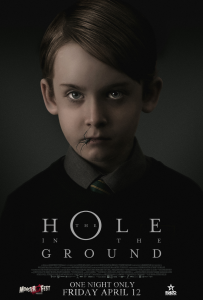 Wearing its influences on its sleeve and starting very promisingly, The Hole in the Ground is a horror film that, to a fault, sticks to the overall metaphor. We’ve seen this all before – creaking house in the woods, people looking through door knobs, going into the woods at night with only a torch – but Cronin does a fine job of working with tone and atmosphere. There are almost no jump scares and it isn’t afraid of burning slowly to the climax, creating this tale with talent and some amazing visuals courtesy of Tom Comerford’s cinematography. The Shining was clearly a source of inspiration, with long tracking shots of a car winding down a lonesome road, and when we enter into the woods it feels like the early parts of The Evil Dead.

For a debut feature Cronin shows quite a lot of promise, but by its third act Hole in the Ground loses its way, throwing off the spooky foundations of this story to go into pure metaphor rather than working with the characters already set up. There are multiple ways of interpreting this tale – YouTube analysers will have have a great time putting all the little clues together – but it comes at a cost to the film itself. The music is overbearing too. It’s unsubtle and blaring over too many scenes, telling us the exact moments to be scared when it should have let the atmosphere and visuals do the work.

Seána Kerslake was a good find. We’re with her for every scene and she carries the film all by herself while sporting an excellent collection of overalls. She has the biggest eyes too, the camera absolutely loves them. Supporting work varies. Little James Quinn Markey has a few great theatrical flourishes but can’t overcome his age like other child actors, but luckily James Cosmo, who can grow one of the greatest beards in show business, comes along to pick up the slack.

There’s something inherently creepy about small children. Creatures that are supposed to be the most innocent of us all are also the ones that worry us the most. There’s also the fact that the more you think about reproduction and childbirth the more it makes absolutely no sense. Even though Cronin’s inexperience pokes through the finished product, The Hole in the Ground is worth checking out if you’re in the mood for a horror film that explores real themes with aplomb, and it will leave you working it out for days to come.

The Hole in the Ground screens at Cinema Nova on Friday 12th April for one night only through Monster Fest in association with Rialto Distribution.

Written By
Simon Storey
More from Simon Storey
In this day and age with significant amounts of people turning away...
Read More