Veteran actor Darren Nesbitt plays Jack, an ageing British drag queen that goes by Jackie Collins. On stage she is raunchy, sprouting gaudy one liners as old as he is but with fresh energy. The drama comes thick and fast at the beginning of the story. After a performance, Jack collapses and is diagnosed with terminal cancer at the hospital. Simultaneously he meets Faith (Jordan Stephens) an up and coming drag queen. After showing her the ropes of the drag club, she finds Faith going to sleep in her car at the end of the night. Jack, semi-reluctantly insists Faith stays indefinitely on his couch.

They’re a mismatched pair in every way – bar the drag – but this isn’t a comedy despite the ripe pickings. Writer/director Jamie Patterson focuses on squeezing every ounce of emotion he can from this tube of dramatic toothpaste. At it’s best the film is sincerely heartwarming, particularly in the moments where Jack and Faith interact. They’re both sweethearts in they’re own way, it’s a moving relationship they share.

The biggest drawback for the film though is this onslaught of bittersweet moroseness. Jack is a good guy but it’s setback after setback and all the characters approach everything with the same manner. It ends up feeling monotonal without the troughs and peaks that a good drama needs. At it’s worse, we are hit with on-the-nose monologues delivered by Jack who proceeds to spend his time looking around teary eyed to sad music. It should be an empathetic connection but the words always feel a bit clunky and forced and the moments don’t quite hit. 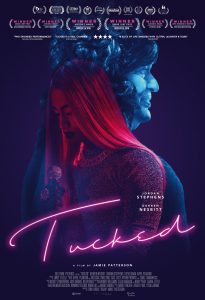 Further hindering the film is a ham-fisted subplot with Jack’s estranged daughter Lily (April Pearson). For reasons that don’t quite make sense she refuses to speak to him after Jack abstained from his deceased wife’s funeral at her request. When they do make their inevitable reunion the scene plays out with nonsensical cheesiness. There’s back story inconsistencies and more clunky dialogue. After a rambling speech she tells him she wants him to walk her down the isle in four weeks (and Jack has less than six weeks to live). We only just met her 60 seconds ago! It’s a bit Bold and the Beautiful.

What’s nice to see in the film is the blasé approach to the characters queer and gay identities. Jack is a nonchalant and surprisingly straight transvestite. Faith unapologetically spurs all gender and sexuality labels. No stereotypes are exaggerated for comedic/dramatic effect.  It’s not the main element of the story but it’s a nice touch.

There’s a little niggling feeling of something missing after seeing this film. There’s no transformation or redemption. Jack starts and leaves the only way he knows how, with booze, irreverence and heart. Faith remains a confident queen with a wealth of potential. And Lily remains as the awkwardly inserted daughter. Neither of the two main characters have any character flaws to overcome, there are no lessons to be learned. It all washes over for an anticlimactic, predictable end.

Written By
Ben Isbel
More from Ben Isbel
Stations of the Cross begins with one of the most fascinating and...
Read More