Across a career that has spanned over forty years and fifteen films Lars von Trier has crafted a body of work that demands strong opinions. He’s either a totally uncompromising filmmaker whose works go into the dark recesses of the human soul, a bit like a modern Goya, or an attention seeking charlatan with nothing new to say. On Australian shores the old rivalry between Margaret Pomeranz and David Stratton was always fiercest around the Dark Dane – personified in their brawl over 2000’s Dancer in the Dark. Margaret: “Five stars. One of the best films of the year!”, David: “A peculiarly repellent experience. Zero stars”.

The House that Jack Built is in many ways his penultimate film, certain to divide opinion and designed to do just that. At the world premiere at Cannes it had over a hundred walkouts but was followed by a ten minute standing ovation. Trier as a filmmaker loves to push against boundaries; he doesn’t want people to sit comfortably in a cinema. He wants us to either go into a sense of deep reflection, considering the darkness within us all, or get passionately angry. If the audience leaves the theatre booing and throwing things at the screen he’s done his job.

Matt Dillon is Jack, a serial killer with various forms of OCD, who over the course of twelve years has murdered more than sixty people. We begin the film with a black screen; Jack and someone called Verge (voiced by the late Bruno Ganz) are discussing his life and murderous predilection. Divided into five parts and an epilogue, the audience are taken to five of the murders intercut with he and Verge discussing topics that range from the Jack’s mental health to Nazi architecture. We start in darkness and literally end up in hell; it’s not clear if we’re listening to deep philosophical reflections of Jack’s crimes or the ravings of a lunatic – which sums up the experience of watching the film too.


Proceed with caution. The House that Jack Built is Lars von Trier at his most provocative and some scenes are nothing less than stomach turning. There’s plenty of violence against women – not surprising as von Trier has a history of blatantly misogynistic films – but here he goes to places that few films even dare to consider. In his typical style of bold and disgusting there’s graphic violence against children and one particularly heinous scene of animal cruelty.

There’s probably a PhD in trying to figure this film out. Is this a condemnation of the way that art glorifies serial killers? Why do films like Silence of the Lambs or Se7en get a free pass but arthouse filmmakers like Lars von Trier who show the disgusting reality generate controversy. Surely that’s a case of intellectual dishonesty. 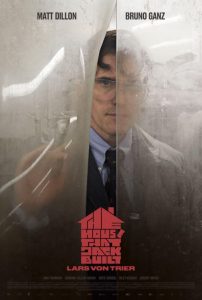 Is it looking at how art influences reality and vice versa? Everything mankind has made can be distilled into two categories: tools and art, and it’s up to us to figure out which is more important. One of the talking points that we keep cutting back to is architecture, like the titular house that Jack is trying to build. The two intercept here. We use buildings as tools for shelter but we also try to make them aesthetically pleasing. Maybe this is the case for films – we use them for entertainment yet they’re the greatest tools ever made for generating empathy. Even if films are disgusting and meaningless, like this one, they’re still one of the few ways we can come to understand how a stranger feels.

If this is the case then artists like Lars von Trier who push buttons to get a strong reaction, while exploring the edges of acceptability, are the most important of all, and it’s critics we have to watch out for. Artists try to understand the world and make people think, only to have critics impose their moral rulers onto the art and tell others to stay away, rather than letting them make up their own minds (current hypocrisy very much noted, thank you).

Or perhaps – and this is the predominant theory – it’s about Lars von Trier himself. Jack reflecting on his murders to Verge is akin to von Trier musing on his career to us the audience, the murders being the major moments in his filmography. There’s even a quick montage of moments from his previous films to drill the point home. If this is the case it’s an incredibly interesting piece of self-analysis. Behind the revolting exterior is an honest look back over his life and art; the murders Jack commits to find solace represent the films von Trier has made while battling manic depression.

As one of the founding fathers of the Dogma 95 movement the DNA is still there. Camera work is handheld and shaky, the pacing goes from languid to rapid from scene to scene, and the actors do their best while trying to wrestle with very strange dialogue, although Matt Dillon does a fantastic job considering some of the things he has to do. There’s even moments of truly bizarre humour.

In a cinematic landscape that has lost so much substance to the Hollywood multiplex a filmmaker that shows us something unique is always appreciated. At the very least Lars von Trier has made a film that will provoke reaction and analysis. There’s probably a catch-22 situation; it would take multiple viewings to understand it but there would be very few people who could subject themselves to watching certain chapters a second time.

It’s incredibly difficult to rate a film like this. On the one hand I’m tempted to give it a 4.5 as a brilliant piece of self reflection that’s worth thinking long and deep about. Sometimes it’s better to be memorable than it is to be enjoyable. On the other I’m equally tempted to give it 2.5 as the narcissistic ravings of an unsound mind, the emperor having no clothes. When it gets down to recommending it, there are very few people who could find any enjoyment in watching a film like this. For balance, I’ll meet it in the middle.

For fans of Lars von Trier this will be his magnum opus but the uninitiated should stay far away; some things can’t be unseen.

The House That Jack Built screens in selected cinemas from 7th March for a limited time through Umbrella Entertainment.

Written By
Simon Storey
More from Simon Storey
It was never going to be an easy task for a Marvel...
Read More