Your parents’ relationship plays a big part in shaping who you are. Basic assumptions on many things are forged in the fires of childhood, and seeing the camaraderie or lack thereof between the duo that brought you into the world inevitably leads to certain expectations. Arguably the strongest bond there is also happens to be one of the few things we all have in common. Human connection seems to be of particular interest to French writer/director Catherine Corsini, and her latest film, based on a novel by Christine Angot, tells a tender tale of misplaced love over several decades.

Told to us through through the memories of her eventual daughter, Rachel (Virginie Efira) is a young office worker in 1950s France. She lives with her mother and sister, still shy to many of the world’s offers. This is until she meets Philippe (Niels Schneider), a lover who seems to be trying hard to be the Frenchiest lover there ever was. They go on picnics, smoke cigarettes, read Nietzsche and make beautifully shot and edited love. There are three kinds of love, Philippe says: material, passionate and inevitable. It isn’t clear what the two of them have, but Rachel’s naivety and the fact that Philippe is an unmitigated dickhead mean that their time together is limited.

Rachel is eventually left alone and pregnant. As her daughter Chantal (played by Estelle Lescure as a teenager and Jehnny Beth as an adult) grows, she realises the one love that trumps them all: the bond between mother and child. 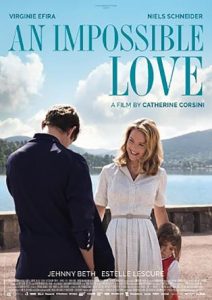 Corsini isn’t afraid of exploring the dark heart of relationships. This was clear in her last film La Belle Saison from 2015, and just like that we’re treated here to a gorgeously shot and emotionally rich exploration of human attachment.

Virginie Efira holds the film together with a brilliantly restrained central performance. There seems to be a strong vein of French acting that isn’t concerned with theatrics or vanity but simply tries to play it straight, simply delivering the line and moving on. She does this perfectly. Efira, who only got her break as an actor a few years ago, manages to make every section of Rachel’s life both believable and unique. At the beginning it isn’t hard to believe that a forty-year-old is playing someone in their early twenties, a rare feat for an actor.

Neils Schneider, who is now Efira’s real life partner, plays a character that starts off unlikeable and only gets more so as the film goes on. To call Philippe a dick is a disservice to the male anatomy, a compendium of dislikable traits that brings Corsini’s feminist credentials to the surface. The power and discipline that it takes to be a single mother has to be one of the hardest things there is, and she puts it front and centre. This is a film of strong female characters and taboo subjects, balanced perfectly on the edge of shocking and inspirational. Corsini has a talent for strong female characters and she has the decency of not skipping their often overlooked sexuality. Balancing the relationship between a child, their absent parent, and your own aspirations to find someone to hold is one of the many difficult layers that single parents have to wade through. Telling stories like this does a service for us all.

Although it does seem a tad overstretched – at over two hours it could have been cut by twenty minutes and been no lesser for it – An Impossible Love is Catherine Corsini returning to our screens and delivering the thoughtful, barbed and beautifully made love stories she excels at.

An Impossible Love screens as part of the Alliance Francaise French Film Festival from 6th March to 10th April.