Revenge, the debut film of French writer/director Coralie Fargeat, is bonkers. Absolute, balls to the wall, insanity that arrives on screen like a sledgehammer arrives through a stained glass window. This tweaking of the rape-revenge sub genre won’t be for those of weak stomach, but for those who crave their cinema loud and visceral this is the latest must-see entry on genre circuit.

In a luxury villa out in the middle of the desert, married CEO Richard (Kevin Kanssens) helicopters in for a trophy hunting trip. He and two friends (Vincent Colombe and Guillaume Bouchède) do this once a year, but this time he’s brought along a fourth member. Jen (Matilda Lutz), Richard’s latest fling, is a gorgeous American who aspires to be an actress and naively thinks that he will be able to get her foot in the door. When left alone at the mercy of two middle- aged, wealthy and married men with large guns, a particularly nasty case of sexual violence soon follows. Left to die in the middle of the desert and with three men hunting her down, she returns to suck on lollipops and extract brutal revenge – and she’s all out of lollipops.

This is the kind of film that doesn’t so much turn it up to eleven but rather twists the volume knob so violently it snaps clean off. Equal parts bloody disgusting and disgustingly bloody, Fargeat has created a wickedly entertaining revenge flick that shows a new talent for visceral filmmaking. 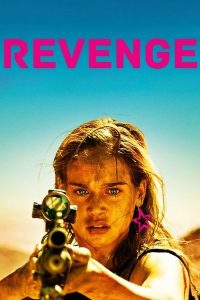 We enter the film seeing Jen like the men see her: sentient meat. Exiting a helicopter sucking on a lollipop in a miniskirt and tiny pink shirt, she’s shot in the same way fast food ads shoot burgers. While Robrecht Heyvaert’s cinematography starts off adjusted to the male gaze, Fargeat soon walks up and king-hits the male gaze straight between the eyes. There’s an excellent use of montage, intercutting images like a half eaten apple into multiple scenes which, just like the situation, rots from the inside out.

This is filmmaking at its most visceral. Scene after scene of squelching, viscous, squirm inducing images that will make viewers everywhere alternatively resist the urge to throw up and cheer. Not even everyday actions are left untouched – turns out it’s a uniquely disgusting thing to see a chocolate bar bitten into in extreme close up. There’s a niche market for this kind of film and those who love films that push right to the margins of bad taste will fit right in.

Italian model Matilda Lutz deserves credit for the total dedication for the role. In a film where she gets raped, impaled, burned and shot, all while wearing little to no clothes, the feminist angle still manages to pierce through like a spear head. It would have been a hell of a shoot too. A lot of her time is spent half naked in the desert sun covered in prosthetic blood, sprinting with no shoes on.

Fargeat uses blood the way that Michael Bay uses explosions or Samuel L. Jackson uses the word ‘motherfucker’. The final confrontation, a hallway shoot out where half the participants are naked and the other half aren’t far off, has to be one of the bloodiest scenes in the history of cinema. Restraint isn’t a word in the film’s vocabulary; it wears this as a badge of honour to both its advantage and detriment. As fun as a lot of this is, it often slips into indulgence that most other filmmakers would have reigned in.

As a genre, rape-revenge films bring their own set of ethical questions. Yet in terms of a filmmaker cutting through all nuance and giving us a film that delivers like a sucker punch, Revenge is both wickedly entertaining and visually creative. Films like this are best seen with a bunch of friends or in a packed cinema, as absurdity of this magnitude is better when its shared.

Written By
Simon Storey
More from Simon Storey
Say what you will about Darren Aronofsky, he’s never been a director...
Read More