Neil Jordan has a long history of films that seem to divide opinion; opinions that change over the years as his films are reassessed. The reviews flit between the sublime and the ridiculous, as sometimes his films are within the same scene – just look at Interview with the Vampire. It feels like he’s always on the boundaries of doing something different, something great, and sometimes it works, sometimes is doesn’t. The psychological horror Greta is another one of his movies that will likely split audiences.

Frances (Chloë Grace Moretz) has recently moved to New York with her friend Erica (Maika Monroe), and is still dealing with the loss of her beloved mother. One day she finds a handbag left on the subway and, being the naive out-of-towner she is, decides to return it to the owner in person. In a tucked away apartment – cosy, almost stifling – that seems part of another world she meets Greta (Isabelle Huppert), a charmingly, disarmingly European-accented older widow. The two are searching for connection, and a friendship soon morphs into a pseudo mother-daughter relationship. But when Frances pushes away after uncovering something that puts their meeting in a different light, Greta strongly resists. 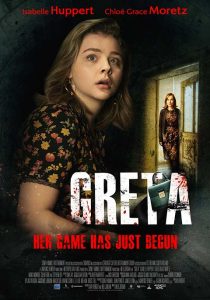 Once it gets going Greta is a lot of fun, but it takes some time for the film and Greta herself to let loose, to dive into its dark and darkly comic impulses, for Jordan to play with his angles and sound design, and embrace the B-movie vibe it needed all along. Up until then its footing is a bit unconfident, its dialogue sometimes stilted, leaning on the score (which is too full of screeching strings) to bolster the tone when the heavy lifting should be done by the script.

Really though, this is worth seeing for Huppert’s performance. Rightly celebrated in Europe but criminally overlooked in Hollywood (she should have won that, somehow single, Oscar nomination for the stunning Elle), here she’s excellent once again. She transforms from a pitiable, lonely widower desperate for companionship into a brilliantly psychotic, ever-present malevolent maternal figure like something out of folklore. It’s complimented by a fully committed performance from Moretz, Jordan wisely making the most of close ups of her expressive face early on.

You might see some of the turns coming and might have been on similar routes before, but that doesn’t mean this isn’t a fun ride in excellent company.

Greta is in cinemas from 28th February through Universal Pictures.

Written By
David Nagle
More from David Nagle
Throughout its short history, The United States of America has long seemed...
Read More