It would be fair to question the need for another film exploring the phenomenon of celebrity. Documentary essays on the life (and death) of Whitney Houston abound, Netflix is riddled with success stories (and the opposite) and the rise of the social media star is yet to peak. As a cinematic entrant in this crowded field, Vox Lux and director Brady Corbet provide an elegant and thoughtful reflection of the complications of fame.

Vox Lux opens with a very confronting first act, the teenage Celeste (Raffey Cassidy) is the survivor of a school shooting in the late 1990s. When she and her sister Ellie (Stacy Martin) channel the complexities of Celeste’s experience into a song, they capture the hearts of the nation. Celeste is quickly picked up by a manager (Jude Law) and a record label, and her previous life, as a modest and religious schoolgirl, is replaced with that of a teen pop star.

The second and third act of the film jump ahead to 2017, where Celeste – now played by Natalie Portman – is readying herself for her return to glory with a comeback tour kicking off in her home town. She is now prone to questionable drinking and drug use, relies on her sister to raise her teenage daughter (also played by Cassidy), has abysmal relationships with her staff and is generally a very troubled woman. In preparing for the concert, Celeste is linked to an attack by terrorists wearing costumes from her recent video. 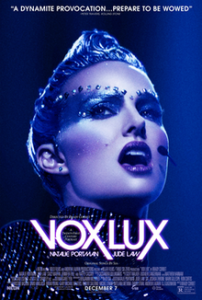 The film reads as an essay or a reflection on a number of contemporary preoccupations and afflictions; on celebrity, gun control and violence, larger scale politics and smaller scale personal responsibilities. This distils down to a thesis on the contemporary human condition, which Corbet acknowledges in the closing scene with the text ‘A 21st Century Portrait’. It may not be an argument which will be transparent at the initial viewing, but one senses that repeated and later viewings will be required for Vox Lux. Certainly, the film has the potential to stay with the viewer for many days.

There are certain indicators to the era in which the film is made – this is a very ‘Post-Trump’ text – but there are also timeless qualities to Vox Lux. Aesthetically the film is quite elegant, albeit raw, and narratively the story addresses age-old themes of the ‘heroes quest’ (or anti-heroes quest) and the ‘coming-of-age’ tale gone askew. The three-act structure gives a literary quality which makes the timelessness quite deliberate.

The character of Celeste is, at times, quite unlikeable, and the tones of morality oozing out from the direction are also on the nose. But Portman is fabulous, mostly in her presence and physicality, rather than her lines. It is her performance which holds the film together, and keeps the hokeyness at bay.

Vox Lux is in cinemas from 21st February through Madman Films.

Written By
Amy Taylor
More from Amy Taylor
Directed by Kevin Macdonald, Whitney is the most recent documentary about the...
Read More