Put Happy Death Day 2U down to a case of a studio cashing in on a surprise hit, but you can’t blame a guy for trying. Christopher Landon’s Happy Death Day last year gleefully mixed up the slasher flick with the tried and true Groundhog Day complex, Jessica Rothe excelling as Tree Gelbman, a hungover college girl who must die on repeat as she tries to figure out who her masked murderer is. The results were an entertaining brand of cheese, and Landon’s follow-up clearly wants to provide a similar serving.

By releasing on Valentine’s Day it’s hard not to wonder if Landon is also making a comment on the day itself through the analogy of an increasingly dire time loop—‘Oh bloody hell, not again’. Each to their own. Whether or not this is the case, it’s certainly a similar sentiment for Tree as she finds herself again waking up pants-less on her birthday in Carter’s (Israel Broussard) bed, exactly the time and place she hoped she would never have to revisit, especially given they’ve already become an item since then. 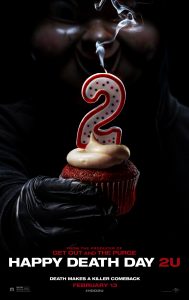 But apparently we’re back to square one, with all of the first film’s work seemingly for nothing. This time, though, at least we know a little of who and what is to blame: a malfunctioning electromagnetic orb thingo designed by Carter’s roommate Ryan (Phi Vu) and his science major pals that has inadvertently split reality into a series of parallel universes. In a film as knowingly daft as this, don’t expect to be handed a detailed explanation on the dynamics of the multiverse, just a succinct one. All we need to know is that as Tree dies she will wake up in new realities that are all slightly different.

Happy Death Day was a simple mashup with a singular focus, but it is a more scattered sequel that sees the impressive reunion of the whole cast for a second madcap showing. With the addition of the sci-fi element, rarely does Happy Death Day 2U amount to a lot of sense, although missing the first five minutes due to being shown into the wrong cinema may not have helped. (Sorry about that.) Even with that impediment, it’s clear the fact that  Landon is straining his initial premise. These genres don’t allow a lot of room for movement, and as a result Landon often reverts to the tactic of mocking the slasher/college/sci-fi tropes themselves, which can get quite meta when it isn’t blunting the original’s slasher bent by making light of the surprisingly wholesale murderous instincts lurking beneath the surface of college life.

What remains is a black comedy that makes as much fun of Tree’s expansive interpretation of the ‘live every day as if it’s your last’ motto as it does of the complications of waking up in a universe where your boyfriend is instead dating the two-faced head girl of your sorority. Add to this a less screamy, more jokey ensemble crew working on the equations and a mostly exasperated Tree copping it from all angles out in the field, and you’ll find a film more concerned with finding adventurous ways to die than giving said deaths any weight. It’s not great but it’s a laugh. Perhaps that’s enough.

Happy Death Day 2U is in cinemas from 14th February through Universal Pictures.

Written By
Angus Tonkin
More from Angus Tonkin
He may not be a household name, but Roy Cohn may well...
Read More