Two hundred million dollars. Thousands and thousands of hours of work. Hundreds and hundreds of talented people who excitedly told their families that they were creating a blockbuster with James Cameron. The most modern of special effects technologies from the workshops pushing the boundaries of what’s possible on screen. It’s times like this when you wonder what other films – so many other films – could have been made with all that money, time and talent. Because Alita: Battle Angel really is a giant waste of all three.

With the number of cliched, worn out, tired parts of this movie, you’d think it would be based on something older than the early 90s Japanese manga Ganmu. Alita takes all the worst traits of James Cameron (who writes and produces) and Robert Rodriguez (who writes and directs) and stuffs them into an eternity (though really just two hour) long CGI bore-fest that criminally wastes the talents of its actors and crew.

In Alita it’s 500 years in the future, centuries after a great war when cities that floated above the ground were brought crashing down. Cyborg doctor Dyson Ido (Christoph Waltz) is combing a scrapyard of rubbish that drops down from Zolem, the last remaining sky city. There he discovers the bodiless head of a young cyborg, her brain and heart still intact. He takes her back to his clinic in Iron City, where – to make the subtext really obvious – he gives her both the robo-body and name of his dead daughter.

Soon amnesic Alita (a mo-capped Rosa Salazar) discovers she has unexpected, instinctive fighting skills. This leads her to seek out her long lost past, get involved with the bounty hunters that patrol the city, and enter the high stakes world of “motorball” (a tedious mix of Robot Wars and roller derby). All this while falling in love with the first meatbag (human; cyborgs are ‘hardbodies’) she runs into, playing out the part of the rebellious teenage daughter, and attracting the attention of villainous Vector (Mahershala Ali), Chiren (Jennifer Connelly), and their mysterious, Zolem-residing boss Nova. 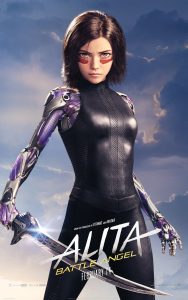 To start positively, the special effects of the cyborg bodies are pretty impressive, as is the fact the Alita doesn’t fall into the uncanny valley that usually plagues CGI’d human faces. But the rest is just a mess. There are plot threads dangled then just dropped, but we are still left with at least four different stories competing with each other which wildly throws off the pacing. The ending makes zero sense within the context of what came before, as well as being infuriatingly inconclusive and sequel demanding.

The dialogue is awful, sounding like something produced by a robot that’s been fed a load of bad sci-fi and YA. Cameron and Rodriguez aren’t exactly known for writing dialogue well – for girls, for women, for actual believable humans – and that’s pretty obvious here. Some actors come out looking so bad that maybe it’s a good thing that certain characters who feature throughout only get about four words between them. Sci-fi (especially the ones about AI or cybernetics) exists to challenge us, to ask the fundamental questions at the heart of it all – what does it mean to be human? What makes us human? Compared to the poetry of something like Blade Runner 2049, Alita is like the scribblings in a pre-teen’s diary, “Today I fell in love and tried oranges and chocolate for the first time. It was a good day”. (This is basically the first part of the movie).

It’s true that one of my film hates is badly done exposition, but this movie just takes it to another level. It’s perfectly possible to tell a story without characters doling out huge chunks of background info, without explanatory flashbacks. It’s possible to convey what a character is thinking or feeling without lit-er-ra-lly having them say what they’re thinking and feeling. Not that you’d know it by watching this. Some gems include “She couldn’t deal with her death. Or maybe she just couldn’t deal with me”. “I wanted to kill. But maybe I was hoping that he’d actually kill me”. “I made a monster, so I felt responsible for all the other monsters out there”.

The action scenes have all the weight and tactility of a hologram, with the excitement and peril of a child smashing two action figures together. The decent soundtrack is filled with emotive strings and ques, begging us to care, to feel something. But there’s nothing there. Oscar-winning actors like Waltz and Connolly are given next to nothing to work with, while Ali’s character just embarrassingly serves as a puppet through which his white master speaks (with all the racists undertones you can read into that). There’s also some uncomfortable sexualisation going on with Alita at different points. She’s portrayed as a child but then there’s a point where her body changes to her own self image and someone says “looks like she’s older than you thought she was”, and both Ido and her love interest comment how much more ‘impressive’ she looks.

Alita: Battle Angel is another case of Cameron and Rodriguez being more interested in the technical challenges of a project rather than those other crucial aspects, like character, story or performance. Sometimes “development hell” exists for a reason.

Alita: Battle Angel is in cinemas from 14th February through 20th Century Fox.