It doesn’t matter how serious your film is; you can always make it about love.

That’s apparently the philosophy of Barry Jenkins, the Oscar nominated director and writer of Moonlight. That film, which claimed the Academy Award for Best Picture, sensitively explored the intersection of black identify with queer identify through a touching love story. In his follow-up If Beale Street Could Talk, Jenkins takes a similar approach, revealing the struggles of legal injustice and police brutality towards black Americans through the prism of two young people head over heels for one another.

Tish (KiKi Layne) and Fonny (Stephan James) are Jenkins’ protagonists this time around, whose romantic connection is so strong it seldom need words. In the film’s opening scene, the two slowly clip-clop their way down a stairway without opening their mouths, each content in the other’s presence. It’s a stark contrast to the next scene, where the same couple are left to communicate with one another through a glass wall in a prison visiting room. We soon learn two things about our main duo that shape the rest of the film: Fonny was falsely accused and Tish is pregnant with their child. 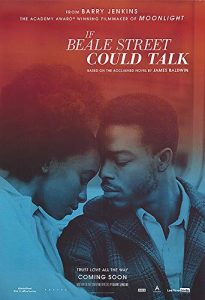 Jenkins, who adapted the screenplay from James Baldwin’s novel, resists the temptation to get caught up in plot, freely swapping between narrative-driven scenes and elongated flashbacks. These flashbacks are the film’s most beautiful moments as they let us absorb the romance between Tish and Fonny without the barriers of prison cells getting in the way. Each time we return to the past, Jenkins lets us sit in that moment for as long as we need, feeling no rush to snap us back into the present timeline. Halfway through the picture, he even slows the action right down to give the mic to Daniel (Brian Tyree Henry), whose cameo helps reveals the true tragedy of the film: that although the events of the film aren’t set in modern day America, they may as well be. Twice the film’s flow is interrupted by monologues about police brutality towards black people with stock photos revealing the reality behind Jenkins’ screenplay.

Daniel isn’t the only secondary character to get their time to shine; Aunjanue Ellis’ performance as Fonny’s god-fearing mother is a masterclass in how to steal the one scene you get. The scene in question is one of many episodic-like sketches, which is how Jenkins decided to move the story forward in favour over exposition-heavy scenes.

By comparison, Kiki and Fonny don’t need to do much except stare longingly into the camera. So much of their relationship is communicated through facial close-ups with subtle smirks and eye movements revealing so much about their characters and their mutual infatuation. Both characters are easy to like, but perhaps the film’s biggest letdown is that neither reveals themselves to be particularly multi-dimensional characters. The audience may find themselves wanting just a little bit more from the pair.

With a different soundtrack, the affectionate scenes between Kiki and Fonny could look cheesy, but If Beale Street Could Talk’s tone is set with a fantastic score that occasionally builds to unsettling thriller-esque crescendos. It’s just one of the stylistic efforts that makes the film a worthy follow-up to Moonlight. It’s by no means as strong a piece of storytelling – something the Oscar judges have already decided in their Best Picture assessments – but few can deny that If Beale Street Could Talk is a beautifully made film with patches of excellence.

If Beale Street Could Talk is in cinemas from 14th January through Entertainment One.

Written By
Kevin Hawkins
More from Kevin Hawkins
Cricket is a sporting code that divides this nation; you either love...
Read More