Ben Is Back is a personal film for its writer and director, Peter Hedges. While not based on any one true story, it is reportedly a response to the death of his friend due to a drug overdose, the near death of his niece, as well as the death of Philip Seymour Hoffman. Hedges’ mother, also, is a recovered alcoholic. Given the personal ties, it is only fitting that his film should star his son and man-of-the-moment, Lucas Hedges.

Ben Is Back takes place over the course of twenty-four hours. Ben (Lucas Hedges in what is probably his best role to date), who is meant to be in rehab, shows up unannounced at home on Christmas Eve morning. His mother, Holly (Julia Roberts), while concerned, is thrilled to see her beloved son and agrees that he can stay for one day because after all, it’s Christmas. Ben’s stepfather, Neal (Courtney B. Vance), and his sister, Ivy (Kathryn Newton) are not convinced it’s the right decision, while his younger half-siblings (Mia Fowler and Jakari Fraser) are ecstatic, suggesting they have been shielded somewhat from his past.

It’s somewhat unfortunate that Ben Is Back is released so soon after Beautiful Boy (which starred Lucas Hedges’ Lady Bird co-star, Timothée Chalamet), which told a very similar story. Both sons are of a similar age and have similar families (upper middle-class, divorced and remarried parents, much younger half-siblings), and both films are focused primarily on the relationship between child and parent. 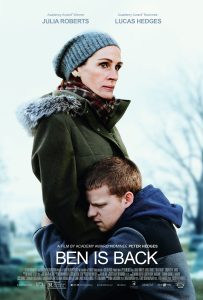 The major differences are that Ben Is Back takes place over just one day, focuses on the mother-son relationship, and is not a true story (but rather inspired by multiple stories). The latter point means that the narrative appears more manipulated (events happen just at the right moment) compared to Beautiful Boy. However, the film still succeeds in being very believable as an accurate portrayal of drug addiction. It’s telling that both films are told by filmmakers with personal experiences of addiction (in Luke Davies’ case, he was an addict himself).

Of course a major theme in Ben Is Back is the lengths parents will go to for their children. After the family’s dog is stolen by one of Ben’s enemies, Holly drives them to multiple dangerous locations in hopes of getting the dog back in time for Christmas morning. In the process she is exposed to a world far removed from her own but doesn’t let fear get in the way of protecting her child. You will have never heard Julia Roberts drop the F-bomb so much in a film before. It’s terrific to see her in such a role and while her casting may raise concerns that this will be a saccharine affair, it thankfully is not.

Over the course of the film we learn more about Ben’s past and the many lies he has told. These lies are revealed in such a way, however, that it’s still easy to sympathise with Ben and to see him as his mother does – as just a child. (It’s notable, however, that his entire past is never completely revealed, as this may have made it harder to remain sympathetic). Like with many films dealing with the topic of addiction, it is difficult to remain too hopeful about Ben’s prospects of recovery, but the film’s refusal to tie the film’s resolution up in a neat bow is necessary for accuracy’s sake.

Judged on its own merits, without comparison, Ben Is Back is a strong film about important subject matter. It’s just a shame it was released so soon after a stronger similar film which may undermine its success. For those who may be tossing up between the two, choose Ben Is Back if you prefer the mother angle and a little more dramatisation.

Ben Is Back is in cinemas from 31st January through Roadshow Films.