As filmgoers we’re immune to seeing characters flirt with death, suffer cruel injuries and even fall from extreme heights. But in most cases, we’re protected by the knowledge that we’re watching make believe, that green screens and stunt crews are keeping anything bad from happening to our favourite actors. Rarely do you find yourself fearing for a real person’s life, yet that is the enduring experience of Jimmy Chin and Elizabeth Chai Vasarhelyi’s 100-minute edge-of-the-cliff documentary, Free Solo.

The real person in question is Alex Honnold, a man who scales mountains – with or without ropes and safety gear – for the sheer joy of it. His big challenge is the El Capitan Wall, a mountain face almost one kilometre tall in Yosemite National Park that no one has ever free climbed.

Alex’s claims to be a real person are not always convincing; his motivations for wanting to attempt such a feat are not exactly clear, while his cold detachment from conventional human emotions makes him difficult to empathise with. He’s the kind of guy who only ever wears one shirt, eats his dinner straight out of the frying pan and struggles to reciprocate when his girlfriend tells him that she loves him. He’s exactly the kind of guy crazy enough to want to risk his life on a regular basis. 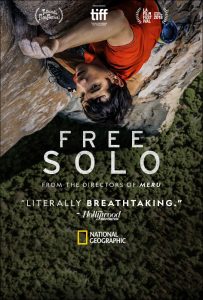 But while Free Solo spends most of its time following Alex and his physical and mental preparation, the film isn’t really about him. Alex’s emotionless disconnect with the notion of death means that we need other characters – like his brave girlfriend Sanni McCandless, his nervous film crew (including Chin) and his fellow solo climbing friend Tommy Caldwell to better understand the implications of a fatal slip up on Alex’s behalf. Whereas Alex provides the action, the piece to cameras provided by his friends give this film a much-needed heartbeat.

Being a film about impressive mountain face, it’s no surprise that the cinematography is a highlight. Notably the angles at which Chin and Vasarhelyi’s crew captures Alex’s ascent up various mountains serve the dual purpose of magnifying the difficulty of free climbing while accentuating the breathtaking wonder of this unusual hobby. Close-up shots of Alex’s feet balancing on tiny mountain cracks are interspersed with wide panoramas of Yosemite National Park, which put Alex’s obsessive pursuit in perspective.

Therein lies the strength of Free Solo, a documentary that does justice to a niche subject area with precise detail, while giving the audience something deeper to reflect upon. We may not be able to relate to Alex’s personality or his passions, but there’s something admirable about his impulsive desire to fulfil his life’s ambitions. Likewise, our risk threshold may never surpass that of Alex, but his attitude towards death is thought-provoking in its flippancy.

Free Solo is in Australian cinemas from 24th January through Madman Films.

Written By
Kevin Hawkins
More from Kevin Hawkins
It wasn’t all that long ago that a film starring Emma Stone...
Read More