Based on Colin Thiele’s children’s book, which gave us the Australian classic from 1976, Shawn Seet’s remake of Storm Boy is a decent adaptation which will hopefully get bums on seats for the school holidays and features what could quite possibly be the greatest ever on screen performance by a pelican.

Michael (Geoffrey Rush) is a retired businessman overseeing the company he built being passed along to his son. As a major deal is being finalised, which will have massive consequences to the local fauna, visions of a buried past begin to bring back memories. Through discussions with his granddaughter Madeline (Morgana Davies) his childhood comes back to him. Growing up in a beach shack after his father (Jai Courtney) isolates them from society, the young Michael (Finn Little) befriends a trio of pelicans whose mother had fallen foul of local hunters. These feathered friends and a local indigenous man known as Fingerbone Bill (Trevor Jamieson) are his only link to the world outside the sand dunes.

Filmed on the gorgeous South Australian coast, particularly around Port Elliot, this version of Storm Boy holds together on the strength of the updates to the story and the pelicans, who steal the show. The original was a milestone of the Australian New Wave and one of the films that put David Gulpilil on the map. 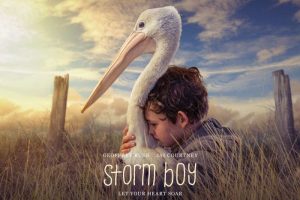 The cast hold this together. Courtney is better here than in any of his Hollywood productions and Trevor Jamieson does a fine job as Fingerbone. He even shares a cameo with Gulpilil in one scene. The indigenous angle is more fleshed out in this version. Land rights and indigenous identity serve as backdrops to a lot of goings-on, and although this story has been brought into the modern day the themes that Storm Boy has always dealt with are timeless. Protecting Australia’s unique environment was an important factor back in the 70s, but in the era of awareness about climate change and the ecological catastrophe we’re currently witnessing in the Murray-Darling system, the message is more relevant than ever.

The presence of Geoffrey Rush is likely going to overshadow the conversation. Filmed in 2017, before the accusations against him had surfaced, it’s a shame that this is going to dominate the film’s public perception. Rush has always been a great actor, and remains so here, and the age old debate over whether it’s acceptable to separate the art from the artist is worth chewing on again.

The true stars here are the pelicans. Five birds were trained and raised for the job of playing Mr Percival and co, and they’re better than anyone could have hoped for. Reportedly Finn Little had to go see them every week during pre-production so they could bond, a process that is obvious on screen because he genuinely seems to have rapport with them. Even though baby birds look like Lovecraftian monstrosities before they grow feathers, these pelicans are some of the most lovable creatures to be on screen in ages. Two of them have retired from their careers in acting and now reside in the Adelaide Zoo.

While this version of Storm Boy doesn’t do anything particularly new or engaging, it has its heart in the right place. Those looking for enjoyable local cinema, or to fill up another afternoon during the school holidays, should check this out.

Storm Boy is in cinemas from 17th January through Sony Pictures.