Joe Cornish follows up on his underrated and underviewed debut Attack the Block with this childhood adventure fantasy. A play on words from 1979 film The Man Who Would Be King, The Kid Who Would Be King is the introduction of the Arthurian legend to a new generation of children.

The film begins by throwing around plenty of references to the turmoil and disunity of the modern world. Without explicitly saying it, Brexit  is the focal point within the London media setting; though a few US stories will come to mind. In the midst of this craziness is Alex (Louis Ashbourne Serkis, son of Andy Serkis). Alex has just started high school, and we are introduced to him as he saves best friend Bedders (Dean Chaumoo), bravely fighting off two older bullies.

Fleeing the same bullies later, Alex finds a sword in a stone in an abandoned construction site. He and Bedders joke about Alex being King Arthur reincarnate. It takes Merlin appearing through a portal in Stonehenge for them to take things seriously. Merlin lets the two know that the OG King Arthur had an evil half-sister Morgana (Rebecca Ferguson) he had banished to the underworld. Morgana is now feeding off the disunity of the modern world and will soon be strong enough to resurrect. 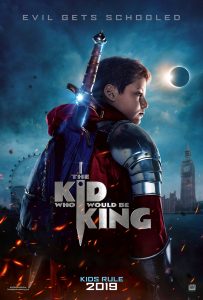 Merlin is played both by Angus Imrie and Patrick Stewart. The dual role is explained late in the film when Stewart lamely claims that there is a wise person in every kid (calm down R. Kelly, he’s talking metaphorically). As well as passing on crucial information, Imrie brings charisma and entertainment, taking this slightly silly role seriously. Stewart in an old robe with geriatric hair askew lends credibility to the picture.

While Alex and his small band of knights march to the underworld, Morgana sends her minions (skeletal wraiths on fiery horseback) after him. Those battles quickly become repetitious and frankly lazy writing mixed with so-so CGI. Initially Alex fights just one fiery wraith. Then later three, then later a dozen, then later a hundred, then even later a few hundred. The atmosphere never feels perilous after the first encounter. The final battle with Morgana is likewise a bit of an anti-climax.

With multiple references to Lord of the Rings scattered throughout the film, Cornish takes a note from the trilogy by giving his film more than one ending. What should have been a tidy eighty minute running time ends up as a bloated marathon that will leave the kids restless and mums peeking at Instagram. Tacked on at the end of the ‘final’ battle is a half hour side-plot involving Alex’s entire school, some bewitched teachers, and more wraiths. It drags the film to a superfluous 132 minutes, nearly a full hour longer than the pinnacle of Arthurian child entertainment, The Sword in the Stone. Also patched in is a subplot involving Alex’s absentee father which makes no sense. It’s purely there so Bedders can compare him to other fictional heroes without dads such as Harry Potter, Luke Skywalker, etc.

While the core story is solid, treating its audience – thirteen and younger- with respect, it’s the trimmings that drag this flick down. For adults the highlights of the film are the scenic landscapes of Britain. Don’t expect too much else. For the kids expect a fresh hero’s journey story that will test the attention span.

The Kid Who Would Be King is in cinemas from 17th January through 20th Century Fox.