Writer-director Sean Anders may have been responsible for the visionary Hot Tub Time Machine, but don’t let that taint your anticipation of his newest project Instant Family. As an adoptive father himself to three children, he obviously has a mission to highlight the foster care system in the United States, where there are not nearly enough carers to take in the number of children needing a home. This film is his attempt to heal that disparity by explaining the system through his own experience (on which this is apparently based): the ins and outs of adopting children, the challenges, but most importantly the benefits. And while Instant Family is occasionally betrayed by a Hollywood tendency to cosmeticise an infinitely more complex situation, it is mostly an honest, amusing and heartfelt ride.

Pete (Mark Wahlberg) and Ellie (Rose Byrne) are a childless couple getting into the renovation game when the mere idea of starting a family quickly becomes a reality. Time isn’t slowing, they’re getting judgmental sounds from immediate family about the possibility of kids. So when Ellie introduces Pete to a foster care agency’s website, he doesn’t need much convincing to see the value. Perhaps they could improve at least one kid’s life.

The next minute they’re meeting with the agency and having the path laid out led by a couple of frank case managers (Tig Notaro and Octavia Spencer). Adopting, let alone parenting, a child is not as simple as it might appear, but they go ahead with it. Yet for all their initial enthusiasm, when they hit it off with teenager Lizzy (Isabela Moner) they are daunted at the prospect that awaits them. She comes with two younger siblings, Juan (Gustavo Quiroz) and Lita (Julianna Gamiz), so suddenly a house of two becomes five. 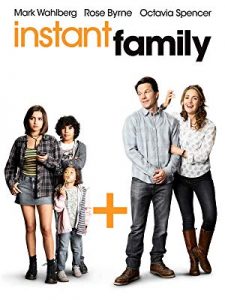 Tackling some weighty themes with humour and levity, Instant Family is often surprising in its frankness. It refuses to settle into a mould, is lifted by strong performances across the board, and despite some narrative flaws it manages to balance good intentions with harsher realities. Hollywood demands a happy ending of its wide-release comedies, but this journey seems more intimate and earned than most in this feel-good comedy space. It doesn’t shirk its responsibility to treat its characters’ volatile histories with care, and the gravity of these children’s experiences in the system makes the writers work for their laughs. More often than not, they don’t seem staged but rather work as a valve for the building pressure as Pete and Ellie attempt, and often fail, to bridge the divide.

It’s refreshing to find Wahlberg and Byrne’s middle-class couple are far from perfect. They are familiar and relatable in their flaws and selfish instincts, and refreshingly it is not their triumphs or flattering gestures of charity but their lack of perspective and subsequent learning process that makes up the largest focus for the film. Mark raises concerns about being seen as a white saviour for their adoptive Hispanic brood, Rose jokes about another prospective adopter enacting the plot of The Blind Side. Through Instant Family we can even see how a foster family with the wrong intentions or preconceptions can be a damaging influence or experience, and in this way the adoption agency support group, mediated by the delightful pairing of Notaro and Spencer, is an effective sounding board for the wider foster care experience. It’s all in aid of bringing what for some might be an uneasy conversation out into the open.

For all its surprises though, Instant Family is visibly tempted by a neat ending, and in doing so it can’t quite hide some blind spots. The film has no qualms in building Pete and Ellie up to be the rightful parents of these children, despite some fairly solid reasons to the contrary and the ultimate aim of foster care being the reunification of parent and child. Yet when the birth mother of Lizzy, Juan and Lita eventually surfaces from prison, she is depicted as a stumbling block, seen but not heard, spoken for as a woman who was never truly up to the task. This seems a jarring oversight in an otherwise compassionate and open-minded film.

There are many observations about the sector in this film I could not possibly vouch for, and one can imagine it’s not always as palatable as Instant Family might suggest on face value. However, you can’t ignore its honourable intentions and worthy message. That it delivers these with cheer and insight is a bonus.

Instant Family is in cinemas from 10th January through Paramount Pictures.

Written By
Angus Tonkin
More from Angus Tonkin
Just for a second let’s put to one side the claims of...
Read More