Few can deny the timeless appeal of the original Mary Poppins. Led by the legendary Julie Andrews in her feature debut, the 1964 classic boasted a much-loved soundtrack by the Sherman brothers, some of the most memorable dance sequences ever seen on screen, and of course, animated dancing penguins. As portrayed in 2013’s Saving Mr Banks, Poppins’ creator, P.L. Travers, was pursued by Walt Disney for the rights to the film for over twenty years, and was not at all happy with the end product when it did eventually come to fruition. Travers rejected the concept for a film sequel in the 1980s, and acquiesced to the stage musical adaptation (which premiered in 2004, eight years after her death) on the grounds that no one from the original film – the Sherman Brothers in particular – be involved. Fast forward to 2018, a whopping fifty-four years since the original magic, and Poppins is back on screen. The sequel was approved by Travers’ estate but one can only assume she would not be thrilled; the penguins are back and they’re dancing on her grave.

With all due respect though, it’s what the people want. And a sequel should emulate the original. So does Rob Marshall – arguaby the movie musical maestro of our time (responsible for Chicago and Into the Woods) – manage to reach the heights of the original? He gets pretty damn close.

Set twenty-five years after Poppins’ last visit, Mary Poppins Returns sees Jane and Michael Banks (Emily Mortimer and Ben Whishaw) all grown up, with Michael grieving his late wife as he struggles to make ends meet. With the family home at 17 Cherry Tree Lane at risk of repossession, the new generation of Banks children, John (Nathanael Saleh), Anabel (Pixie Davies) and Georgie (Joel Dawson), put their heads together to find a solution to their father’s money woes, and before they know it Mary Poppins (Emily Blunt) is descending from the heavens to save the day. Cue a series of memorable adventures with Poppins and lamplighter Jack (Lin Manuel-Miranda) while Michael and Jane endeavour to sort out the boring adult stuff.

Almost every scene/musical number matches one from the original. There’s a cleaning-is-fun number (this time in a bath instead of the nursery), an adventure that involves jumping into a decorated bowl (instead of a painting), shenanigans on the ceiling with an eccentric relative, a bed time lullaby, lamplighters (instead of chimney sweeps) dancing through the streets, and a finale with balloons (instead of kites). Michael has become his father, Jack is Bert’s protégé, the admiral next door (David Warner) is still blasting his cannons, and Mary remains practically perfect in every way. 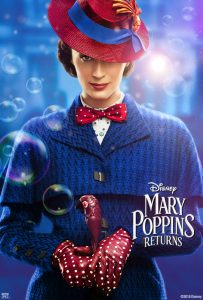 While you can’t exactly argue with critics who have labelled this film as derivative, is that really a fair criticism when it’s been fifty-four years since the original? It was a lame criticism to make of The Force Awakens, and even more so here. While many of us haven’t personally waited fifty-four years to see another iteration of a childhood favourite, it’s been long enough to warrant a twenty-first century rendering that sends jolts of nostalgia through our veins while dazzling us with new production design and costumes along with a fabulous new cast. Is the ‘Trip a Little Light Fantastic’ sequence as brilliant as ‘Step in Time’? No, but that’s because ‘Step in Time’ is one of the best dance sequences ever seen on screen. Just like how Mary Poppins is one of the best films of all time.

Now let’s get the obvious out of the way. No, the songs in general are not as good as the magic served up by the Sherman brothers. (But geez, talk about high expectations.) Marc Shaiman and Scott Wittman have done better songs before (most notably in Hairspray and Smash) but that doesn’t mean their contributions here aren’t enchanting. Rather than the standalone songs, however, it is Shaiman’s instrumental score that soars. Full of small references to the Sherman brothers’ original score, it also uses reoccurring motifs from the main song, ‘Can You Imagine That?’, and is frequently breathtaking, especially when Mary descends from the clouds.

It’s a tough ask to emulate the legend that is Julie Andrews, but Emily Blunt is exceptional in the title role and makes it her own. All accolades heaped upon her performance are well-deserved. Lin-Manuel Miranda oozes loveliness as always, Ben Whishaw is wonderful as Michael, and Emily Mortimer is at home in the role of Jane. The child actors are all very good but one minor criticism – and this may be more on the writers – is that they didn’t come across as kids who had lost a mother. Meryl Streep, Colin Firth and Julie Walters lend star power in supporting roles, and Angela Lansbury and Dick Van Dyke show up briefly in cameo roles. In the case of the latter I was overwhelmed with emotion – THE MAN’S STILL GOT IT.

Story-wise, there are only a couple of moments that can be faulted, with David Magee contributing a fine screenplay to the mix. Those hoping for an utterly new Poppins will undoubtedly find fault in a film that lends heavily from its predecessor. However, elements of the plot are also taken partly from P.L. Travers’ book sequels so such criticisms should be aimed at the source material if anything. As with most films from the genre, Mary Poppins Returns is aimed primarily at those with a fondness for movie musicals, and is unlikely to disappoint those who have waited with bated breath for this nostalgic gem. Thank you, Disney.

Mary Poppins Returns is in cinemas from 1st January through Disney.

Written By
Claire Robson
More from Claire Robson
It can be so heartening to see the quality of films on...
Read More