In modern filmmaking there are few directors who have stamped as unique a footprint as Yorgos Lanthimos. This idiosyncratic Greek is impossible to ignore, as his unorthodox and often grotesque filmmaking elicits responses ranging from being branded a new provocative film maestro to a chorus of people muttering “What the fuck did I just watch?” The Favourite, the first of his films he hasn’t written or co-written, is exactly the kind of bizarre, hilarious yet quietly disturbing work he excels at.

In 1708 Queen Anne (Olivia Colman) sits on the throne. England is at war with France, casualties are mounting and the cost skyrockets. All of this means very little to those living in the royal court, where gossip and duck racing take up more brain space than little things like war and politics. Lady Sarah (Rachel Weisz), the queen’s best friend, servant and occasional lover seems to be the one making decisions. When a new servant, Abigail (Emma Stone), begins to gain the queen’s favour it begins one of the most bizarre love triangles cinema has ever birthed, as the war of politics and the politics of war are usurped by the issue of who can best navigate Anne’s childish mood swings.

Filmed in the astoundingly beautiful Hatfield House in Hertfordshire, The Favourite is a gorgeous trip into the petulant mood of 18th century royalty. There’s just enough parody to make this Lanthimos’ most accessible film to newcomers but with more than enough comic strangeness to please his fans. 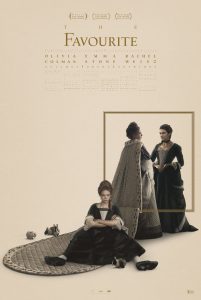 The humour shares a lot of DNA with Aunty Donna, the great Australian sketch-comedy trio; a brand of gross out absurdism that a lot people can’t stand yet many find hilarious. Lanthimos is the master of tapping into a very peculiar vein of pitch-perfect black comedy; it’s often unclear if we’re supposed to be tittering with laughter or sitting in wide-eyed discomfort.

Colman, who was so good in Lanthimos’ previous The Lobster, steals the show. Of all the actors giving it their all, such as Nicholas Hoult who is fantastic, she’s the one who fits this director’s style the best. Flipping between childish credulousness and the arrogance of old aristocracy she’s able to hold the strange mix of tone at a perfect balance.

Lanthimos has always been able to add element of social critique into the strangest places. His brand of straight faced absurdity is a way to explore ideas from a very unique angle. There’s a weirdly contemporary feel to this society of the ultra rich and powerful. They live in an insular world, divorced from reality, and they play reckless games with each other while occasionally throwing half-hearted odes to important issues.

Whether you find Lanthimos to be brilliant or an acquired taste, the fact remains that he is one of the truly unique voices in modern cinema. No one can provoke discussion quite like him as multiple viewings often unearth previously unseen secrets. The Favourite won’t be for everyone but those looking for a weird yet compelling experience should seek this out. It’s impossible to forget and that’s always a good thing.

The Favourite is in cinemas from 26th December through 20th Century Fox.

Written By
Simon Storey
More from Simon Storey
The youngest man to ever win the Oscar for Best Actor was...
Read More