In 2012 a lovable, unlikely duo burst onto our screens and forever changed what it means in animation to be a bad guy. Wreck-It Ralph was the perfect fable teaching kids to create their own destiny and not live within the confines of societal norms. Ralph was the bad-guy of his arcade game, but he wanted to be a good guy and win a medal, but after cutting corners and making a mess, he ultimately learns that the most heroic thing you can do is help others, and from that journey of self discovery he discovered a true friend, Vanellope.

Six years on and the two are still fast friends, playing their part in their individual games, and catching up to goof off and drink at Tappers after hours. But Vanellope, once again brilliantly voiced by the inimitable Sarah Silverman, is bored with the daily grind and looking for a new challenge. Ralph, once again voiced to perfection by lovable oddball John C Reilly, steps in to help but does what he does best, and the characters of Sugar Rush are ultimately driven out of their game by an unplugging. Overhearing a kid in the arcade saying the broken piece of the game can be found on the internet, Ralph and Vanellope set off into the newly plugged in, out of bounds WiFi to find the piece and save the game. 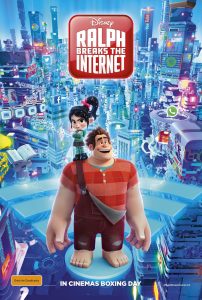 What Ralph Breaks the Internet does extremely well is personify the mundane experience of using the internet. From sign twirling pop-up ads, to overwrought, unappreciated search bars, the film brings the internet alive for a new generation. While those of us more tech-literate than perhaps the target audience (who I pray to Tim Berners-Lee have never heard of the dark net or even Reddit) will gain a little something extra from the meme-ridden asides and social media faux-pas, the film does skip a beat on two rather important opportunities.

Firstly, half the fun of the first film was the clearly defined mission and the easily identifiable obstacles which Ralph and Vanellope had to cleverly overcome. But this film is missing an overarching storyline, leaping from one loose thread to another (I suppose, much like the internet itself), hinging the entire piece on a loose interpretation of relationship dynamics. The thing that ultimately serves to derail the mission is the inability of the two heroes to communicate and understand each other, an important lesson, but a rather flimsy storyline.

Secondly, as a film centred around the good and bad of the internet, where the film ultimately falls flat is trying to be so clever and meme-ridden it misses the most important aspect we should be teaching young, vulnerable children about the internet, and that is how to contextualise and ultimately come to terms with the unreal reality of social media, the harmful behaviour of trolls, the unexplainable and confusing existence of spam, and the harmful realities of virtual bullying. Ralph Breaks the Internet successfully takes the virtual world of the internet and makes it real, but fails to teach its audience the real world consequences of putting things online. Younger and younger children have smart phones with access to the internet and a skill set online otherwise unimaginable to the generation of us who only just grew up without it. A glaring missed opportunity in what was otherwise an enjoyable, if bland film.

Ralph Breaks the Internet is in cinemas from 26th December through Disney.