Ever since Transformers arrived on cinema screens in 2007 the series has been the great example of the disconnect between critics and ticket buying audiences. Every single one has been a critical punching bag yet they always strike gold at the box office – two of them breezed past a billions dollars – proving that critics don’t have nearly as much influence as they think they do.

So when it was announced that Transformers was going to try and make its own cinematic universe, all the rage in Hollywood at the moment, with an origin story for Bumblebee set in the 1980s and staring John Cena, the collective guffaw in the filmgoing community could be heard around the world. Let this be a lesson to never judge a film by its series. Time to eat humble pie because Travis Knight’s Bumblebee is better that it has any right to be. This is easily the best film in the series thus far.

The year is 1987. Predator and Lethal Weapon are killing at the box office, The Smiths top the charts, and with Reagan in the White House nuclear war seems entirely possible. This is the strange time that seventeen year old Charlie (Hailee Steinfeld) spends her final summer at home. She’s an outcast, traumatised by the death of her father and spiteful of her mother who seems to be coping a lot better than she is (Hold on a second… Edge of Seventeen, where did you come from?). When she finds a beat up yellow Volkswagen Beetle at a scrapyard she takes it home to tinker with. This isn’t just any car of course; it soon reveals itself as everyone’s favourite yellow transformer, who unfortunately is the target of a pair of Decepticons who have teamed up with a shady government agent from Sector 7 (John Cena). 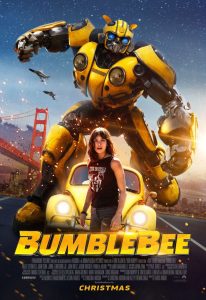 This is everything Transformers should have been from the start. For the first time this series is aimed at teenagers but doesn’t feel like it was made by a teenager. Previous films had less of a heart than the sacrifice from Temple of Doom, coming off more like excuses to blow millions of dollars on special effects and explosions. Where everything possible was shoved into the frame at every given time and the camera couldn’t go seven seconds without moving.

Bumblebee on the other hand, working off Christina Hodson’s fantastic script, adds a real and engaging human story at the centre. Compared to previous entries this is filmmaking from an entirely different universe, scaled back to let characters and relationships take centre stage. The story informs the action, not the other way around.

Steinfeld, who spends the film in a fabulous collection of band shirts, has grown into a wonderful young actress since her debut in True Grit. She’s played this kind of role before but she’s so good at it that it’s engaging every time and there’s such a great on-screen rapport with her and Bumblebee it’s easy to forget we’re watching a special effect. There’s no eye-rolling stupidity that was so common in the Bay version of this story; care and effort has been sown into this character and the rewards are spectacular.

John Cena doesn’t get a great deal of screen time but once again shows a talent for knowing exactly what tone to aim for. The man’s comedic timing is perfect.

The Transformers series now has its own Wonder Woman. It’s a single film that does away with all the grimy, undesirably muck that plagued the other entries and proves that there’s still merit to this cinematic world. With Steinfeld’s wonderful performance at the centre and a soundtrack of banger 80s tunes, this is a pitch-perfect, crowd pleasing triumph that shows Hollywood still knows how to make engaging and thoroughly entertaining summer popcorn spectacle given the right people.

Bumblebee is in cinemas from 20th December through Paramount Pictures.

Written By
Simon Storey
More from Simon Storey
Written and directed by one of Britain’s most acclaimed directors, A Quiet...
Read More