Every moment in culture is reflected in the art it produces. In a world changing as swiftly and as fundamentally as the one we find ourselves in it’s rare to see something that so perfectly captures the mindset of a certain segment of the population. Here we have Pierre Morel making a film specifically tailored to the isolationist, xenophobic fringe growing steadily all over the world, particularly the USA.

In Los Angeles Riley North (Jennifer Garner) lives with her husband and young daughter. They’re a battler family, making ends meet and trying to provide in a difficult economy. When Riley’s husband gets mixed up in a botched drug deal he draws the wrath of a Hispanic drug kingpin (Juan Pablo Raba) whose MS-13 style gang, facial tattoos and all, guns down the family in an unintentionally funny scene where Riley watches her husband and daughter get machine gunned and doesn’t drop the ice cream she’s holding. Five years pass and Riley returns to LA with a very particular set of skills, skills that make her a nightmare for Mexicans everywhere.

Coming from the director of Taken, and bringing all the fear mongering and badly edited, frantic action scenes with it, Peppermint feels like a paranoid InfoWars fantasist watched John Wick in their basement and figured they’d rewrite it. It’s the kind of deluded, race-baiting power fantasy an 18-year-old who binge watched 1980s action films and played every Call of Duty back to back would consider the apex of female empowerment.

What we essentially have here is Alt-Right fan fiction. A checklist of every single thing the angry fringe of the American Right rails against – Mexican gangs, corrupt legal systems, gun control, snobby elites and the mainstream media. It’s as if the collective hatred conjured up during a heated Trump rally manifested itself into celluloid. The kind of experience that NRA board members will watch on a Friday night alongside a bottle of lube and a box of tissues. 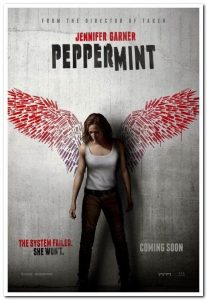 The screenplay by Chat St. John, whose previous writing credits include London has Fallen and a Punisher short film, is a cliched riddled mess with nothing new to say. Undeniably there is an attempt to even out the racial issue – one of the detectives who helps Riley in her quest for vengeance is Hispanic actor John Ortiz – but this is drowned out by the piercing sound of a dog whistle wailing over every scene. It’s a film that doesn’t so much throw the message at you but holds the viewer down and punches it into their eyeballs.

The bad guys are exclusively Hispanic and for one brief scene Korean. Facial tattoos and allegiance with the cartels are a given. Reinforcing the point even further, almost every scene involving Juan Pablo Raba has a Día de los Muertos statue in the background. This is without mentioning that the gang has their drug cooking lab operating on top of a piñata factory.

Riley is like something dreamed up on a Breitbart forum. MMA fighter, gun nut, knife wielding, trash talking vigilante babe in a tank top. Beloved by social media and the downtrodden but condemned by the #FakeNews mainstream media.

Jennifer Garner has proven in the past that she can make it as an action hero, but whatever those talents were they’re past their prime. It is unfathomable what attracted her to this project. What is meant to be a no-nonsense action heroine in the style of Sarah Conner becomes a ludicrous parody of what it aspires to be, encapsulated in one scene that has her face-to-face with a deadbeat dad trying to intimidate him. What’s supposed to be a moment of feminine badassery has all the gravitas of the school captain trying to lecture a year 7 who pushed ahead in the lunch line. This probably isn’t Garner’s fault though; it would take a very rare actor to add any nuance to a script that makes her say with deadly serious inflection  “I’m gonna shoot you in your fucking face”.

Morel and co would have made a totally forgettable, badly made action-revenge film if it wasn’t for the film’s politics; a blatant attempt to capitalise on the white hot anger radiating from an increasingly ruptured American culture. This isn’t a byproduct brought about by bad writing and design choices, though both do factor, this stems from the film’s ugly little soul; the corrupted, putrid core which has poisoned everything around it.

Peppermint isn’t the worst film of 2018 but it’s undoubtably the most culturally and politically despicable. Not a racist film per se but one that will be like catnip for racists.

Peppermint is in cinemas from 13th December through Roadshow Films.

Written By
Simon Storey
More from Simon Storey
If you want to write a film which explores a certain group...
Read More