Mortal Engines is an initially interesting and engaging futuristic tale with an aesthetically pleasing steam punk facade. The film is based on the novel of the same name from author Philip Reeve and picked up by Peter Jackson, whose producer credit seems to be the biggest draw card the marketing team have.

The first hour of the film is gripping, hands on your seats action as you are plunged into a mysterious world with an even more mysterious protagonist, Hester Shaw (Hera Hilmar). The red scarf she obscures her face with belies a loner that does not like to reveal too much of herself. The two things we know about her are that she is dangerous and motivated by revenge. It’s a classic tale transposed in a beautiful, awe-inspiring setting.

The film’s voice over introduction expedites the back story very efficiently, though a few tantalising plot points go unexplained to those of us unfamiliar with the books. Essentially the Earth as we know it was destroyed hundreds if not thousands of years ago. We are in the distant future where cities and townships are mobile and cannibalistic; trundling across continents, fuelled by gigantic motors and gears. Think of behemoth Howl’s Moving Castle with rotating machinery in lieu of legs and scary engine fires that devour smaller cities rather than a friendly fire that devours eggshells voiced by the delightful Billy Crystal. 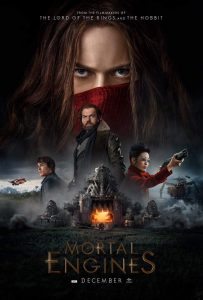 The villain of the film, and the object of Hester’s revenge is non other than Australia’s own Hugo Weaving as Thaddeus Valentine. He plays dastardly villain with the dapper manner that makes him so enjoyably loathsome. Unfortunately his character’s driving motivations leave much to be questioned. Despite being a heinous villain it’s simply hard to have any attachment, negative or otherwise, to such a murkily crafted character.

Even more mishandled is Stephen Lang’s character of Shrike, the other potential villain introduced mid-way through the film also shrouded in mystery. The film races through a subplot that slows the entire story down and attempts to sledgehammer in an emotional whammy that will have you cringing to the point of being physically uncomfortable at the emotional impact it is supposed to have. This is where the film, which had such a strong beginning, begins to slow down and fall apart under the dead weight of dull side characters and recycled modern Hollywood platitudes. Expect to hear a lot about love, and the importance of living with a ‘free soul’.

The film is beautiful and the cinematography and world building is on point. The cast is wonderful with another standout being Robert Sheehan who is well overdue to break out from the small screen. Onto the negatives – it suffers from banal tangents, uncharismatic side characters, and cheesy, cheap writing loaded with clichés. This is a dropped ball from industry veteran and first-time director Christian Rivers. Not helping is an ending that a more cruel critic than me might describe as soggy. Or sappy. Or a good feelings party that completely betrays and undermines the previous two hours’ attempt at setting up a complicated but interesting retro-futuristic humanity.

Mortal Engines is in cinemas from 6th December through Universal Pictures.

Written By
Ben Isbel
More from Ben Isbel
Ben-Hur 2016: Or how I learnt to love Hollywood and stop inevitable...
Read More