Another month passes, another moderate success from the last 30 years gets remade. On the roulette wheel of Hollywood desperately searching for new franchises the ball landed on Dr Seuss’ How the Grinch Stole Christmas. Named simply The Grinch this time, Scott Mosier and Yarrow Cheney have made a dazzlingly colourful but forgettable update to this story.

In the town of Whoville, Christmas is a big deal. No other holiday comes close to the silly season, when the halls are decked with boughs of holly and jingle bells can always be heard in the distance. Every Who down in Whoville loves Christmas a lot, but the Grinch (voiced by an unrecognisable Benedict Cumberbatch) who lives just north of Whoville, does not. We all know this story, don’t we? The little girl Cindy Lou wants to send a message to Santa, the Grinch decides he’s going to steal Christmas, everyone comes together at the end in harmony, peace and love to all, feliz navidad, etc.

This isn’t the first time that the Grinch has been remade on the big screen and it probably won’t be the last. Previous versions have included Ron Howard directing Jim Carrey in 2000, and before that the 1966 animated version featuring the voice of Boris Karloff. This new take has all the wonders of modern animation to play around with but it doesn’t come close to the iconic images from the 1966 version or have anything as memorable as Jim Carrey’s manic buffoonery. In the long list of animated Christmas films this doesn’t have anything to distinguish itself from the legions of them that show up every late November, early December. However, it’s a welcome development that this version didn’t have to employ a CIA torture specialist to get its star through the filming process.* 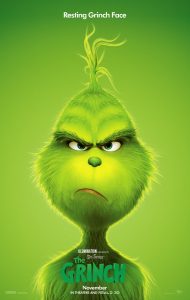 This Grinch is purely for the kids, who will likely have a lot of fun with the bright colours, cute animals and countless chase scenes. There’s none of the cheeky jokes for the parents that were abundant in the Ron Howard film; this version for better and worse is aimed squarely at the ankle biters. This is also the most sympathetic version of the Grinch we’ve seen, as every rough edge has been sanded off to make this dull rendition simply misunderstood and lonely.

The voice cast do an admirable job of injecting some life into the project, headed by the constantly excellent Cumberbatch, whose voice could read the minutes of a Coalition meeting and make it sound interesting. Rashida Jones and the legendary Angela Lansbury show up as well, but it would be difficult to lift dialogue this tame as this into anything memorable, especially when a very bored sounding Pharrell Williams is doing the voiceover.  That being said, there is a welcome attempt to add some feminist points about the hard work done by mothers and some warnings about consumerism, as Christmas should be about family and love, not who has the most expensive presents and the brightest fairy lights.

With Despicable Me, Minions and The Secret Life of Pets, Illumination Studios is becoming animation’s bastion of highly profitable mediocrity. While this is easily the most dull and forgettable version of the Dr Seuss classic, the most important aspect hits the mark: children will likely have fun with it and with the school holidays coming up that’s reason to be happy.

The Grinch is in cinemas from 29th November through Universal Pictures.

* Look this story up, it’s insane. It took an average of eight and a half hours to put Jim Carrey in the Grinch costume, a process he described as ‘slowly being buried alive’. Initially not thinking he could finish the film, the studio hired a man who trained CIA operatives to endure torture to teach him coping mechanisms to get through the shoot.

Written By
Simon Storey
More from Simon Storey
The heady days of the Aussie rock scene circa 1970s must be...
Read More