Horror as a genre has weathered every change that filmmaking movements and social change can throw at it. As the popular, if untrue, adage tells us: all of human action can be placed on a line graph, with fear on one end and love on the other. Whilst being stunning simplistic there is some truth; at any point in history and at every level of story telling there’s always going to be people sitting around and telling stories concerning people in love or about the things that scare us.

In horror filmmaking this has morphed into a weird trend of self-aware postmodernist horror films, concerned less about scaring people but about deconstructing their own tropes. In 1996 Wes Craven tapped into this vein with Scream which was followed by films like Cabin in the Woods and Get Out; a trend that film writer Steve Rose has labeled “Post-horror”. Whether all this falls into the camp of elite intellectual film wank or genuinely new ground being sown in cinema studies is a debate for another time, but it’s mentioned here because whatever this trend is, Brett Simmons‘s new film You Might Be the Killer slots perfectly into the middle of it.

Sam (Fran Kranz) begins the film running through the woods in the middle of the night, his face caked with blood and terror flowing from every pore. After finding refuge in one of the cabins his first action is to call his friend Chuck (Alyson Hannigan, of American Pie and How I Met Your Mother fame), a horror film buff who works in a pop culture store and seems to know what best to do next. This is his family’s summer camp out near a lake, which legend has it is home to a long dormant evil that has awoken to terrorise the camp counsellors  in the form of a man with a large knife wearing a spooky mask – stop me if any of this sounds familiar. 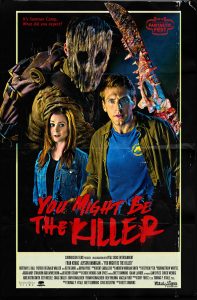 Starting life as a Twitter exchange between writers Sam Sykes and Chuck Wendig, which was adapted into the screenplay by Brett Simmons and Thomas V. Vitale, You Might Be the Killer has its tongue lodged so firmly in its cheek that it should be careful it doesn’t push any further lest it burst out the other side. This is as knowingly eye-rolling and self aware as you’re likely to find, gleefully channeling the vibes of dusty VHS slasher films that filled Blockbuster’s horror section in the mid 1990s.

It’s all a lot of fun. It doesn’t take itself the least bit seriously and the small but dedicated cast clearly enjoyed making it. Andrew Strahorn’s cinematography, for better or for worse, perfectly captures the look of the slasher films it’s paying homage to, meaning that poorly lit forests take up a lot of the running time. There’s also a brief snippet at the end of the last voice actor you’d imagine lending his talents to a film like this.

It’s not scary in the slightest but there’s enough love of the genre to more than compensate, especially since some of the gore is so schlocky and over-the-top that it would make Tarantino titter with glee. This is the kind of film best enjoyed in a packed out cinema, in midnight screenings or in this case with the Paracinema Festival. Better still, watch it with a group of friends alongside shot glasses and a large bottle of vodka.

You Might Be the Killer  screens as part of Paracinema Fest which runs from 29th October to 5th December at Lido, Classic and Cameo cinemas.

Written By
Simon Storey
More from Simon Storey
After Obama’s election in 2009 there was an influx of films about...
Read More