If ever there was to be an award for clearest metaphor, Marc Turtletaub (Little Miss Sunshine) would win it hands down for Puzzle — a drama about a sheltered housewife rediscovering a love of puzzles but struggling to work out her own life. If this had been a rom-com with an A-list cast, you could see the tag lines from a mile away: ‘Life is the biggest puzzle of all’.

Thankfully this is not the contrivance its blurb may suggest. Rather Puzzle is a modest and poignant portrait of a young mother’s awakening, and Kelly McDonald is the best thing that could have happened to it.

McDonald plays Agnes, who upon reaching her 40s has come to realise she is not happy. Living in the suburban outskirts of New York City and mother to a nuclear family, she keeps the house in order and stomachs filled while her content husband Louie (David Denman) provides the money, and their teenage children Gabe (Austin Abrams) and Ziggy (an impressive Bubba Weilar) prepare for their next steps in life. Neither particularly want to emulate their parents.

In this environment the introverted Agnes is both depended upon and forgotten. Louie is content as things are, but as far as he knows her life may as well be a routine of home-cooked dinners and well-flapped table cloths, and any suggestion from her sons that she take some time out for herself seems an impossible fancy while the family needs looking after. But when she receives a jigsaw puzzle for her birthday, a small delight at this sliver of independence grows into a bigger realisation, and a meeting with a fellow puzzler (Irrfan Khan) who represents everything she’s never considered gives her cause to believe she deserves more. 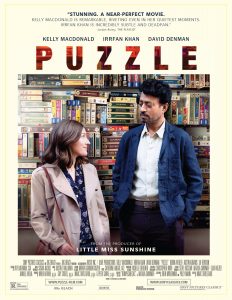 This screenplay by Polly Mann and Oren Moverman is based on an Argentinian film, Rompecabezas by Natalia Smirnoff, and the story transfers neatly to the American home while also seemingly benefiting from being tested once before. Agnes’s humble journey is grounded by a careful and intimate approach from Turtletaub that doesn’t underestimate the weight of her decisions as she sees them. She may be sheltered, but Puzzle thankfully resists the urge to diminish her character by playing her ignorance for ‘duck-out-of-water’ jokes. Rather she is a curious and capable everyday woman with undiscovered talent, and while hers may be a quiet revolution, Turtletaub emphasises that to the person (or persons) at the centre of it, it may not be a small one. Agnes and Ziggy’s relationship as kindred spirits in this turbulence is particularly well-handled.

Of course if you’re paying attention to Dustin O’Halloran’s score, you’ll know quite early what Turtletaub’s end-game is. Every puzzle needs a solution, and Puzzle is about as predictable as you’d expect a jigsaw to be; sooner or later things are going to fit. But for a film about an activity that you’d think should be fun, it could be lighter.

There are light moments, but frequently O’Halloran’s piano is so mournful that he almost intrudes on us to feel sorry for Agnes: ‘Feel sorry for the woman who has never lived’. It is one thing to depict unhappiness, but it is another to indulge it by prefilling emotional responses, and those behind the camera could have eased up on the tone.

Even as we meet her in the opening moments, the mood is already pitying, with Agnes decorating for her own birthday party in the dimmest of dusk’s fading light. Either she’s doing this so that the festivities will be a nice surprise even to her when she turns the lights on, or the director just wanted to underline her gloom.

Perhaps aided by the fairly obvious nature of this positioning, Puzzle never resonates as well as it could, although credit should go to Turtletaub that it is not so glaring as to be the lasting impression; overall he pulls together a moving small-scale drama. No, the lasting impression is the question of why we don’t see Kelly McDonald in more lead roles. Now that is a puzzle.