As Otto Bathurst‘s Robin Hood begins, Friar Tuck (Tim Minchin) implores us to forget everything we think we know about Robin Hood. It’s an ambitious thought. You say jump, we say, ‘How high?’. How far ought this amnesia go? It seems Tuck really does mean everything: traditional fourteenth-century fashion, the sturdiness of horses crashing through walls, the amount of hair product available, women who speak who aren’t called Marian. It seems Bathurst has ripped a leaf out of Guy Ritchie’s book, and the result is a colourful laddish mess.

Given his Kingsman pedigree Taron Egerton may want to choose a slightly different role next time to avoid becoming typecast. He tackles the Robin Hood myth with a cocky petulance familiar to the aforementioned franchise, although it is probably more befitting of the light-footed rogue, a young noble with the world at his feet and the jawline to charm it, than Russell Crowe‘s gruff incarnation. And that charm does not muck around. Within a minute he’s already found and seduced Marian (Eve Hewson), and at this point you feel this Robin would be more comfortable chilling in his stable with Marian or downing pints of mead in the pub than concerning himself with the merits of wealth redistribution. But this sunlit daze is interrupted when he is drafted by notice of the Sheriff of Nottingham (Ben Mendelsohn) to fight in the Crusades.

It’s a gruelling experience, but he survives, or is rather sent home. He may be a trained killer but he doesn’t appreciate the brutality for its own sake shown by his unit leader, and before long he is on a boat back to England. It’s been years since his departure, and upon arriving in Nottingham he is surprised to learn that not only is he officially dead but also that Marian has moved on to another bloke called Will and the Sheriff has nicked his land along with every other bit of coin in sight. As anyone would be, he’s pissed and upset, his lower-lip awobbling. But when an unlikely Moorish friend, John (Jamie Foxx), presents him with an opportunity to do something about his woes, there’s only one thing for it – put on a hood, wrap a hanky around your mouth and take the Sheriff down. 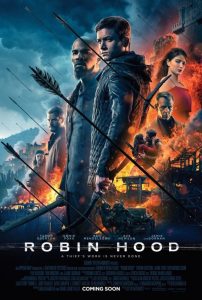 This is a completely bonkers trip to whichever year first-time writers David James Kelly and Ben Chandler thought Robin Hood was around. If they say it’s the 13th century, then we’ll take their word for it. Perhaps that’s best, because if you were to get caught up counting the anachronisms, you may miss the film’s narrative entirely, as thin as it and its characters are. So much money has been put into making this look inventive that it at times almost veers into a steampunk aesthetic while at others it shamelessly raids the Hunger Games costume box. It also decks out the main characters in tailored leather jackets and plunging dresses, pinches Gatsby’s party organiser, throws a finger to the church and introduce a mining industry to Nottingham that even Gimli would be proud of. Perhaps this is a new thing, though Nottinghampunk doesn’t really have ring to it.

Up to a point it’s entertaining to see Bathurst and his writers invest their energy into making a fairly stale concept seem upbeat, irreverent, nifty, stylish – all the things that Ridley Scott’s version wasn’t. But much as this willingness to bring the merriness back the men is appreciated, its focus on style cannot hide its script’s lack of substance or originality. Egerton is perhaps the most brattish Robin we’ve seen, and it is a mystery what Marian sees in him.

However, it’s true her devotion doesn’t always ring true. At one point Marian tells Robin she always knew he would come to back to lead a revolution, having only an hour earlier excused herself for shacking up with Will because she thought he’d died. So sincere.

And just when we’re crying out for a villain we can relish, we can thank Ben Mendelsohn for making the best of a bad lot. He tries so hard to inject some venom into the Sheriff, but his frustration through this movie seems twofold: first, why can’t I catch Robin Hood? And second, why is this character so inept? A hooded money thief with military skills strikes in town the same day Robin of Loxley, the crusader whose land he stole, returns from the dead and promptly begins to splash cash he shouldn’t have. Seems legit.

Robin Hood is in cinemas from 22nd November through Studiocanal.

Written By
Angus Tonkin
More from Angus Tonkin
Last year the United Kingdom was forced into quite an embarrassing retreat...
Read More