Yorkshireman Andrew Haigh wouldn’t be the obvious person to adapt a novel like Lean on Pete by Willy Vlautin, portraying the trials of a young boy’s laboured upbringing in the American west coast city of Portland. But unfamiliar as the surroundings may be, judging by this effort Haigh needs no lessons in the growing pains of youth. On the back of a stellar performance by newcomer Charlie Plummer Haigh finds a comfortable footing in an unforgiving American landscape, portraying a country failing to live up to its own lofty goals.

Scrawny but observant, Charley is a child in limbo. Too young to make his own way, too poor to go to school, he finds himself unpacking in a new town with little to feel secure about. His deadbeat father Ray (Travis Fimmel), short on cash, appears to have shifted their lives to Oregon from Wyoming as much out of spite for Charley’s aunt as for job opportunities. Presumably his aunt thought Charley was better off under her care than Ray’s, and judging by his continuing habit of burning bridges, perhaps she was right.

Caught between bitterness at having to leave behind a budding childhood and his obligation to look after his dad’s more foolish instincts, Charley finds freedom in the local racetrack. There under the guidance of a hard-on-his-luck trainer, Del (Steve Buscemi), he finds a level of independence that he has scarcely enjoyed. Not only does he relish the work, a sense of achievement for him alone, but he is good at it. And as he begins to learn more of Del’s industry, he finds friendship with an overworked quarter horse on his last legs. His name is Lean on Pete, and in him Charley sees a kindred spirit: another neglected soul pushed to breaking point. 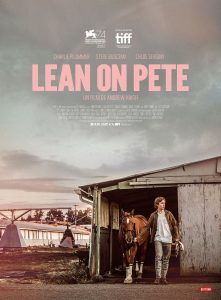 In the same way 45 Years was unwavering in its focus, Lean on Pete does not sugarcoat. Dusty, desolate and downcast, the America he depicts is anything but perfect, defined not by any noble sentiment of chivalry and loyalty between man and beast like Red Dog intended but by small details, often unflattering – flag-bearing patriots with selective morals, salt-of-the-earth trainers dealing across the border in broken horses, returned servicemen praised and silenced in a single sentence. This is a country that proclaims one set of values and enacts another, and perhaps because of this, hope in Lean on Pete is very much seen as a spectre, elusive and to be treated with suspicion.

What results is often a painfully sober film that doesn’t promise a lot of relief. It seems Charley accrues enough scars to set anyone to despair, let alone a ill-equipped poverty-stricken teenager looking for some sense of home, but Haigh’s arm’s-length detachment from his material and Plummer’s gaunt stare often mean that emotion is not always easily accessible. This is perhaps due to Haigh wanting to say more than what might encourage a few tears.

When, for reasons best discovered yourself, Charley embarks on a journey back to Wyoming with Pete beside him, we soon realise that as much as this story is about a boy and his horse, their plight and that of the characters they encounter are symbolic of a broader identity crisis and disillusionment facing America — whether it is the defeatist cynicism of Bonnie the jockey (Chloe Sevigny), one of the most affecting cameos in the film, or the violent desperation of semi-homeless Silver (Steve Zahn), one of the more confounding. In Charley’s case, often his lack of trust causes him to simply clam up, becoming something cold and detached, either unwilling or unable to express himself, his reactions becoming increasingly remote to the kid we saw arranging trophies on his windowsill.

You could say finding a voice for Charley’s silent trauma is what Lean on Pete is ultimately building to, and thanks to Plummer’s heartfelt performance and a realist approach from Haigh it is a harrowing ride. At times Haigh may linger too long in the vast landscapes to emphasise a loneliness we already knew, sinking into a pedestrian pace that undoes the film’s momentum through a 2-hour run time, but it is Charley’s fleeting encounters with charity that really resonate. Charley is by no means a saint, his impulses unmistakably those of a 15-year-old whose naive ideas of justice have been dashed far too early and often, but it’s heartening to see an empathetic eye shown him.

Lean on Pete is in cinemas from 29th November through Transmission Films.