Expectant mum and wildlife warrior Carly Wilson lives on the Gold Coast and has spent much of her working life caring for animals. So while researching gender reveal parties online and discovering just how prevalent the use of helium balloons in not only gender reveal celebrations is, but in all aspects of celebratory life is, she sets out to get to the bottom of why balloon releases are not considered littering when they are so harmful to the environment.

The first important discovery is that the research – the Burchette or “Oak Leaf” study – that the balloon industry bases their claims that “all latex balloons are biodegradable” on, is troubling at best. The study is not peer reviewed, was never published in a scientific journal, is completely out of date and does not include any research regarding balloons’ biodegradability in salt water. Yet time and time again, despite the evidence literally washing up on our shores and in the stomachs of sea turtles and other marine wildlife, this research is brought out as a fail safe catch all for the balloon industry. 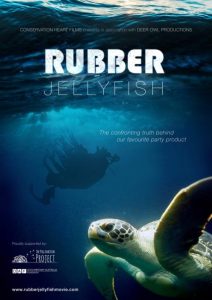 There is an obvious agenda going on in Rubber Jellyfish, as with most documentary films, but at the heart of this handmade journey into the environmental impacts of balloon releases is a crusade to simply educate the public, industry stakeholders and those who have the power to make widespread, lasting impact through policy and change. The overwhelming impression of what Carly discovers is that people, companies, governments, and the balloon industry itself do not realise that balloons do not biodegrade in salt water the same way they do on land, in creek water, or in the ground. They do not know that balloon waste is such a prevalent feature in turtles that are dying from a gut impaction. It seems from what has been collected by both environmental groups along beaches and by veterinarians out of the digestive systems of marine wildlife, in particular sea turtles, that helium balloons do not even break up the way the balloon industry has been saying since the release of the Oak Leaf study. Rather than shattering into small pieces and scattering over large areas as the study suggests, balloons seem to shatter in a way that makes them look, floating in water, almost indistinguishable from jellyfish.

It is heartening to see so many people in varying walks of life trying to do something about helium balloon waste in our environment whether it be as simple as organising a beach clean up day, or lobbying the biggest balloon release culprits to change their ways. It is disheartening however that the biggest impacts in this fight are being made by individuals and not by our government, or indeed the balloon industry itself.

Rubber Jellyfish presents an important environmental issue we all need to learn more about. Who among us has not partaken in a balloon release or accidentally let one go as a child? In Primary School my class tied notes to helium balloons and released them in the hopes we would get pen pals. My balloon was answered by someone in Queensland, a girl in another class had hers answered by someone in New Zealand.

In Queensland the release of balloons into the environment is considered littering. This move was not a very popular one at the time and if you want to know why the decision was made, go and see Rubber Jellyfish.

There are limited screenings of Rubber Jellyfish via Demand.Film in various locations including Cinema Nova on 6th December. For screenings see here. Alternatively, you can host your own screening.