A film passes the Bechdel test when it meets three criteria: “(1) it has to have at least two women in it, who (2) who talk to each other, about (3) something besides a man.”

As the cultural norms in and around the film industry continue to shift, an increasing amount of films are at least ticking the minimum Bechdel requirements. Action films, however, still lag behind a fair bit, with the latest Mission Impossible, Deadpool, Predator and Star Wars instalments all failing.

In light of this, Widows – with four female protagonists taking centre stage – is a step in the right direction for a genre reeking of testosterone. And though Steve McQueen’s Widows might lose a few points for the fact that the female leads are linked by their mutual connection to scumbag (or, should I say ex-scumbag) men, Veronica (Viola Davis), Linda (Michelle Rodriguez) and Alice (Elizabeth Debicki) seldom relinquish control to their male counterparts, nor draw attention to their extra X chromosome.

Viola Davis gives a stunning performance as the widow of Liam Neeson’s Harry Rawlings. When Harry dies in a robbery mission and leaves Veronica with nothing but an angry debt collector (Atlanta’s Brian Tyree Henry) and a book of plans, she reluctantly takes a step into her deceased husband’s world and embarks on a heist worth $5 million. With few contacts in this shady world, she calls on the help of two women also recently widowed as a result of Harry’s botched operation. 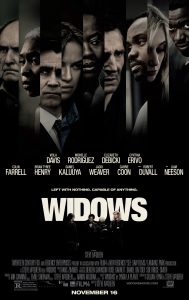 Writers Gillian Flynn (Gone Girl) and McQueen – along with Lynda La Plante, who wrote the source novel in 1983 – should be applauded for the way they portray Veronica, Linda and Alice. They are written as fearless, uncompromising leads who never let themselves be limited by the expectations imposed upon them. They do not attain these traits by miracle through a lazy plot shortcut, nor are they recycled stereotypes; they are empowered ballsy characters that Hollywood writers too often reserve for men like Neeson.

As the women embark on their heist, the plot is driven forward by an election MacGuffin, whereby scenes about the widows’ lives are interrupted by political wheelings and dealings from Jack Mulligan (Colin Farrell) and his father Tom (Robert Duvall), and Jamal Manning (Henry) and his sidekick brother Jatemme (Get Out’s Daniel Kaluuya). While it’s difficult to get invested in the outcome of the election, the quartet each keep the film ticking by delivering nuanced performances – none are particularly likeable, but neither are they hateable. Each has their own despicable trait, but this serves the purpose of making their counterpart a little less despicable. Reverend Wheeler (Jon Michael Hill) foreshadows this in the trailer by preaching that the societal standard for excellence is dropping, a theme that echoes throughout the film in its broad essay on modern day America.

Ultimately, these characters and the complicated web of deceit and corruption that entangles them are an unnecessary distraction from what is most compelling about Widows. The film’s initial focus on three widows seeking to repair their lives is enough to fuel their behaviour and the film is most compelling when McQueen dials this up.

In short, the women are this film’s undeniable stars, while the men are little more than inconvenient distractions who are responsible for all of the film’s problems. If that doesn’t earn the film a bonus point on the Bechdel test, I don’t know what will.

Widows is in cinemas from Thursday 22nd November through 20th Century Fox.

Written By
Kevin Hawkins
More from Kevin Hawkins
It’s almost impossible to reflect upon INXS these days without referencing the...
Read More