Ian McEwan’s penchant for fine storytelling is on display once more in The Children Act. Based on his novel of the same name, McEwan has adapted his own work yet again for the screen with terrific results following on from the recent On Chesil Beach.

Emma Thompson stars as Fiona Maye, a high court judge in London tasked with presiding over family cases, many of which garner plenty of press attention. A workaholic to say the least, her marriage to Jack (the splendid as always Stanley Tucci) is breaking down; he tells her he wants to have an affair. While she speaks eloquently in court she struggles to communicate with him and offers him little more than silence. At work she presides over the special case of an almost eighteen-year-old boy, Adam (Fionn Whitehead) who is refusing a blood transfusion due to his faith; he and his family are Jehovah’s Witnesses. With only days to live should he not receive the transfusion, Fiona visits him in hospital to hear his perspective before delivering her verdict.

While marketing – as well as the title – may lead audiences to believe that the film ends with Fiona’s decision, we reach this at only the midway point of the film. McEwan gives each side a chance to fight their case, but it is fairly clear which side he sits on and we get there in good time. Adam’s presence looms large in the narrative, but this is Fiona’s story, shown from her perspective; she is in every scene. That Adam’s case is so close to Fiona is made clear from what we see of her life. Everything in the narrative ties together to create rich themes about relationships and making time. It’s a story that’s easy to consume but not predictable or preachy, and it resonates strongly. 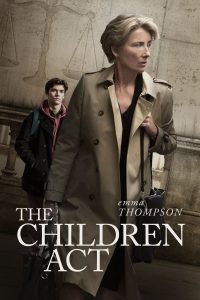 The supporting players – all men – are all developed beautifully. Tucci’s Jack is multi-faceted and he is both endearing and contemptible. Whitehead’s Adam is a little boy lost, struggling to make sense of the bigger world he is in. Anthony Calf plays Mark, the attorney fighting for the hospital’s right to provide Adam’s transfusion, and Fiona’s musical companion with whom she practices for their performance at the upcoming Christmas party. Their regular practices always make a point of showing that Fiona can and does make time for things other than her job, even if she seems to go about it begrudgingly. The best minor character, however, is Fiona’s law clerk, Nigel (Jason Watkins), an awkward yet ultimately lovely man in a thankless job. He’s responsible for the only laughs in the film, lifting the spirits if merely for a few moments.

Emma Thompson is exquisite. Her ability to portray such depth in the smallest of facial expressions is a wonder to behold and this may be a career-best performance. That we’re meant to believe that anyone married to her would want to have an affair is hard to fathom, yet here we are again after Love Actually.

It’s been a long time between drinks for Director Richard Eyre (who directed the superb Notes on a Scandal), having last directed a feature film nine years ago. Hopefully we will not have to wait so long for another. While the phrase “dreadfully British” came to mind early in the piece, the film quickly proved itself to be a mesmerising experience for this reviewer; a slow burn but an incredibly satisfying one. While Ian McEwan’s work can be hard to read on the page, it burns with fire on the screen.

The Children Act is in cinemas from 22nd November through Roadshow Films.

Written By
Claire Robson
More from Claire Robson
Based on the book of the same name by Darcey Bell, A...
Read More