The Girl in the Spider’s Web takes us back to Sweden and back to Lisbeth Salander; ‘The Girl with the Dragon Tattoo’, this time played by Claire Foy. With a new cast and a new director (as well as a new author, David Lagercrantz, for the novel on which the film draws its source material), will this instalment stack up?

Lisbeth Salander is a social enigma; a highly skilled computer hacker, a champion of abused and disregarded women, an agent against the machine.   She has long been at odds with the rest of the world, usually with the law in particular. The film opens with Lisbeth blackmailing a high level CEO who has escaped unscathed after beating two prostitutes. She is then engaged to hack the NSA and steal a complex and dangerous computer program. After successfully stealing the software, Lisbeth herself is burgled and subsequently framed for the theft and the murder of the original programmer. Reconnecting with her old friend, journalist Mikael Blomkvist (Sverrir Gudnason), Lisbeth must save herself and those around her. 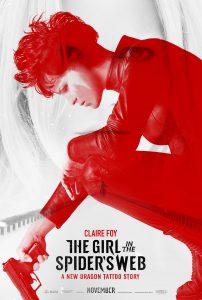 The Girl in the Spider’s Web, directed by Fede Alvarez, leaves behind much of the information established in the original novels and the earlier films. This is fine, however, the film seems to want to take some of the legacies and not all of them. On the one hand this could be great – if the next instalment is an improvement, that is – but on the other hand it’s potentially very frustrating. For this viewer it was particularly unsatisfying. The original films (the Swedish versions and the American remake) were very good, and they were drawn from quite sophisticated source material in the Stieg Larsson novels. Much of the material from the original novels had to be left behind for the films, however they were still quite complex and complete in their own right. Although this reviewer has not read the literary source for this particular film, it is a safe assumption that much of the material of the novel has been discarded – this is standard in a cinematic adaptation. Unfortunately it feels like a great deal is missing in the film. In the screenplay by director Alvarez, Jay Basu and Steven Knight, there are many assumptions made as to what the viewer may understand about the characters, the back story and the significance attributed to otherwise meaningless factors.

Perhaps worse than the assumptions are the inconsistencies, particularly when it comes to the character of Lisbeth Salander. There are so many existing texts which develop this character in a particular direction, and The Girl in the Spider’s Web takes a very odd turn on this journey. The Lisbeth of this film is inconsistent to the one already well established. Perhaps this will be acceptable to a new audience, especially ones who are familiar with the actor Foy from her previous roles. But there is a certain legacy to the Larsson novels and the characters he developed; a legacy which was pre-emptive and prophetic of the ‘me too’ movement, and which saw a chain of characters who excused women of the obligation to apologise or make excuses. This film has certainly left that legacy behind.

The Girl in the Spider’s Web is compelling and there are no concerns regarding the entertainment value. There are a few issues with poor plot advancement; far too many developments rely on conveniences which are barely plausible, but this is a minor quibble. Mostly this is a very enjoyable film, albeit one which may not belong in the greater body of the original collection.

The Girl in the Spider’s Web is in cinemas from 8th November through Sony Pictures.