In his quiet but remarkably assured directorial debut, Paul Dano offers a rich and elegant portrait of 1960s marital discontent. Wildlife, adapted by Dano and Zoe Kazan from Richard Ford’s novel of the same name, features a trio of fine central performances, an incisive screenplay and empathetic cinematography. Together, these are assembled together to create an observant, nuanced portrayal of wounded pride, uncertain yearning and coming-of-age ambivalence. It marks an auspicious, mature effort at the helm by Dano, and signals his commitment to sensitive and visually poetic storytelling.

The Brinsons – Jerry (Jake Gyllenhaal), Jeanette (Carey Mulligan) and their teenage son Joe (Ed Oxenbould) – have recently moved to Great Falls, Montana, where they are starting to settle in. Their financial situation becomes temporarily uncertain when Jerry is fired from his job at the local country club. However, when he is offered his job back and pointedly refuses, instead choosing to indefinitely leave his wife and son for a low-paying job fighting forest fires, tensions ensue. Now tasked with raising her son and finding a job to support them, Jeannette takes initiative and soon appears to grow into her newfound relative independence – so much so that it prompts her to question her identity and marriage, and opens up the imaginative space to consider, perhaps, the possibility of a different life. 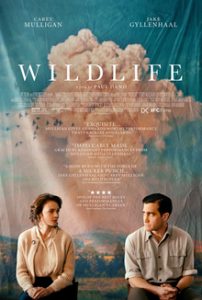 The power of this subtly moving drama is most immediately apparent in its earnest performances. Perhaps the film could have benefited from tighter editing, but under Dano’s patient direction each of them is given the latitude to develop delicate, finely tuned characterisations. Oxenbould’s Joe observes his parents with an introverted, vigilant gaze that is somehow both insistent in its curiosity and yet understandably naïve. Lacking the complete picture he refuses to take sides, and so instead he dutifully watches and tries to process everything as best he can. Gyllenhaal plays Jerry with a visceral honesty. His desperation to redeem his masculinity is portrayed as both selfish and yet tragic; whilst his decision to leave his family should by no means be exonerated, he is nevertheless a man whose sense of self-worth is shaped in critical ways by the gendered norms of his time.

Ironically then, Jerry’s attempts to recuperate some sense of gendered normality for himself creates the opportunities in which Mulligan’s Jeannette can begin to transcend the constraints of hers. Mulligan is perhaps known for her raw, bruising vulnerability, but her Jeannette proves to be so much more complex and compelling. In assuming responsibility for the household she finds opportunities for herself to forge new relationships and renew her sense of self. But this freedom is by no means completely liberating. Instead, it is intensely ambivalent, and Mulligan’s layered performance is, without doubt, amongst her strongest to date.

Diego Garcia‘s cinematography is the poetic visual complement to Dano’s perceptive direction and co-written screenplay. Beguilingly nostalgic in its simplicity and hushed colour palette, the camera maintains a steady gaze on its subjects, often trained on lingering close-ups. It only enhances Wildlife’s compassionate storytelling, and lends the film a wistful atmosphere.