November 8th 2016 is a date destined to be a life long memory for anyone who lived through it. The world on the precipice of history, after a gruelling campaign that ranged from unique to insanity, almost everyone predicted that Hillary Clinton was going to be the first female President of the United States.

From the first black president to the first female president, it was a showcase of the changing times where human progress was displayed for all to see. For most of us the prospect of a Trump presidency was unfathomable. A billionaire reality TV host whose racism, daily lies and childish twitter outbursts would have disqualified anyone else seemed like the antithesis of where the world was heading. This was the man who a month earlier had been heard on the Access Hollywood tape bragging about sexual assault. Yet as the night progressed and it became clear that reality itself was going to jump the shark, the question on the lips of so many is the one Michael Moore begins with: How the fuck did this happen?

Fahrenheit 11/9, getting its name from the date of Trump’s inauguration, sees America’s most polarising documentary maker back to his shit-stirring ways. Moore, who predicted and warned from the beginning that Trump was going to be the 45th President if underestimated, doesn’t just take aim at Trump, but reiterates many of the issues he’s covered previously. There are elements of almost every one of his previous works – kind of like the Avengers of the Michael Moore cinematic universe – and at a whopping 128 minutes he has a lot to say and a burning desire to say it as loudly as he can.

The contention is a surprising one. Trump himself is only half the problem; the entire US political system is so wholly and fundamentally broken that the daily spectacle we’re witnessing was birthed from the miasma around it. Obama, Democratic party skullduggery, and especially the Clintons bare just as much responsibility for Trump as anyone else. Anyone still clinging to the memory of #ImWithHer should rush to see this, for it argues quite convincingly that Clinton is apotheosis of the political establishment that created the mess we’re currently in, particularly how she and the democrats handled Bernie Sanders. The Republican and Democratic parties share the same fundamental flaws; perhaps this explains why a staggering forty percent of eligible voters didn’t vote in the 2016 election. 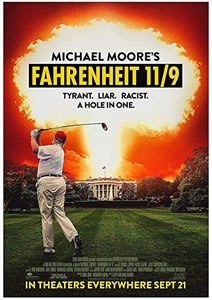 Before venturing in too far with Trump we’re given an overview of the cultural and political landscape. No prizes for guessing that Flint, Michigan, Moore’s home town, features front and centre. Rick Snyder and the Flint Water crisis takes up about a quarter of the running time and Moore, clearly blinded with rage, describes it as “slow motion ethnic cleansing”. Initially seeming like a sensational overreach designed to push buttons, once described in full it’s hard to disagree.

The Flint water atrocity and the way that the government handled it, is just one example. The financial, political and cultural poverty of Middle America, the so-called “fly over states”, have been so perpetually forgotten by the political establishment that it’s easy to see why an outlier like Trump seemed appealing. One of the interviewees, Richard Ojeda, a veteran who returned home and now spearheads a new political movement, states that children in West Virginia currently have it worse than the children he saw in Iraq and Afghanistan. Grassroots political movements, particularly progressive ones, seem to be where the only bit of hope lies.

Trump didn’t create the current environment but he continues to be the person who exploits it better than anyone else. One of the largest targets that Moore aims the big guns at is the media, who gave him more coverage than he could have dreamed of. The mainstream media created the Trump phenomenon and now, realising it’s a mistake, can only watch and try to repair the damage. This also puts Trump in a unique position. His campaign message took aim at the political establishment and the media, so the louder that career politicians and the national news scream in outrage the more he appeals to the forgotten masses that clung to him in 2016.

Where Moore really starts pushing buttons is layering Trump’s voice over footage of Hitler at Nazi rallies. A brief personal note: prior to seeing this I had resisted the claim that Trump was comparible to the start of the Third Reich. In the modern parlance it’s become the great cliche to claim someone is the new Hitler; every side does it and it’s become so overused that the comparison has been robbed of any impact, Godwin’s law in full effect. History cannot predict the future but there are many patterns to identify and be wary of. When Moore outlines the many similarities between the present and the early 1930s, and he’s always been good at splicing together classic footage and current events,  it’s chillingly convincing. Heed the warnings from history, because we’re living through it.

The range of topics is the documentary’s strength yet also its weakness. Moore has always been a polarising figure and this isn’t going to change anyone’s mind, in fact it’s probably going to piss a lot of people off, but even big fans have to admit Fahrenheit 11/9 is seriously lacking in focus. So much is covered in two hours; with ideas pinging off each other it’s the filmic equivalent of a man sprinting from place to place, gathering up armfuls of information and throwing it together, hoping that it all comes together in the end. But the message is important; if it inspires even the slightest bit of change it would have been worth it.

“Make no mistake about it. This is the world in which we now live” is the concluding sentiment we’re left with. The climate we’re in now where people from all sides are more angry and polarised that ever before doesn’t stop with Trump. Stop thinking that impeachment, the ‘blue wave’ during the mid-terms or the 2020 election is going to change anything. The US political system where it currently stands is so broken that it seems incapable of fixing itself. Despite some serious issues in focus Fahrenheit 11/9 is one of the most important films of 2018 that should be seen, discussed and debated by as many people as possible. It’s not clear where any of the current madness is heading towards but we’ll all be in it together when it comes.

Fahrenheit 11/9 is in cinemas from 1st November through Madman Films.