The franchise that, much like its villain, just won’t die, returns for the fortieth anniversary of the original. This is the eleventh Halloween film to be produced. That’s right, the eleventh. But no need to worry about catching up on all previous ten films because the latest offering disregards everything past the 1978 original. Laurie and Michael Myers are not siblings, Laurie isn’t dead, but she is still traumatised forty years on from that fateful night.

Serial killer Michael Myers (Nick Castle) has spent the past forty years incarcerated (certainly not committing more murders as the other nine films might have you believe). When a bus transporting him and other patients from the sanitorium crashes into a ditch, Michael escapes, embarking on yet another murderous spree. Laurie (Jamie Lee Curtis) is ready for him, and desperately tries to warn her estranged daughter Karen (Judy Greer) and granddaughter Allyson (Andi Matichak). Lots of innocent people get bludgeoned/stabbed to death.

Director David Gordon Green (Pineapple Express) pays homage to the original, using John Carpenter’s score, opening titles, and throwbacks to the original, with Laurie mirroring some of Michael’s appearances/disappearances in the 1978 film. One of these was met with applause at the screening I attended and truth be told it deserved it. But does the film as a whole add anything more to the franchise that we haven’t already seen? 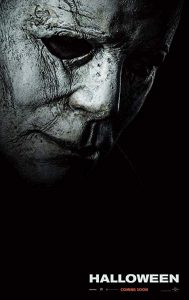 There are early indications in this film that we may finally get some insight into why Michael is how he is; that is, a serial killer who started murdering at the tender age of six. Unfortunately, this doesn’t go anywhere and there’s little more explanation than him being born evil and staying that way. His motivations are frustratingly still not clear; he wants to kill Laurie because he didn’t last time, sure. But is that it?

Compared to the 1978 version, it’s unsurprising that this film is a lot more graphic. It’s a slasher film, sure, but at times it was almost a bit much for an MA15+ rating, and one can’t help but wonder how mentally stable viewers who *enjoy* this kind of film are. (Of course it’s possible that much of the violence was in my head given how often I had to look away during those scenes. The sound effects were disturbing enough). There are plenty of jump scares for those who delight in such tropes; it’s just a shame half of these were in the trailer.

For a sequel, the latest Halloween is extremely derivative, with many scenes simply recreating those from the original. It’s all very predictable and it’s remarkable that this franchise keeps making money with a storyline that doesn’t really go anywhere. That Michael seems basically incapable of being killed off is frustrating, and viewers can only ever half-heartedly celebrate his apparent demise. While original director John Carpenter has reportedly stated that this really is the last film, Green and co-writer Danny McBride have suggested there is more to come. The question is: why? And the answer is probably: money. With the film breaking records in its opening weekend in the States, Halloween shows no signs of going anywhere. Much like its narrative.

Halloween is in cinemas from 25th October through Universal Pictures.