Schlocktober is upon us, bringing the promise of chilling thrills and bloody spills. A time of year when all the big horror films are released in tandem, leaving fans at the mercy of whatever filmmakers have in store for us. The British entry for the year comes to us from the mind of Andy Nyman and Jeremy Dyson and is based on a stage show they co-wrote. Ghost Stories is exactly what the title suggests it’s going to be: a slightly tongue-in-cheek compendium of several horror tropes, brought together with Nyman’s particular brand of awkward screen presence, which he can do better than almost anyone else.

Philip Goodman (Andy Nyman) is a respected professor and television presenter. Well versed in the field of ghosts and the paranormal, he’s a firm believer that ‘the brain sees what it wants to see’. There’s no such thing as ghosts or psychics, a fact that he loves to prove on his television show where he debunks conspiracy theories and phoney mediums. Yet this resolve is tested when he receives an invitation to meet Tony, the person who inspired him to take up this line of work as a boy, a man who hasn’t been seen in decades. Sick and living in poverty, he asks Philip to finish the investigations he wasn’t able to finish – the three cases that haunt him to this day, the ones without rational explanations or simple solutions.

It’s rather difficult to decipher how much of this is meant to be taken seriously. Many moments are played with a knowing silliness, implying this is meant to be a horror/comedy – like how the Monster Mash plays over the credits – but when it’s time to get the spooks on it pulls no punches. It’s a tricky film to work out. The writing and directing duo have used every move in the playbook to wring the most out of their scares yet it’s hard to figure out if the many moments of black comedy are intentional or not. 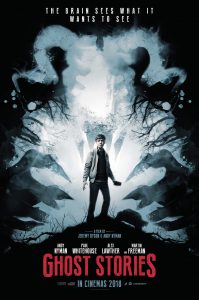 The biggest hint that it was all intentional comes from the impressive cast that this duo have assembled, including the surprising presence of Martin Freeman in a key role. Freeman, Paul Whitehouse and Alex Lawther are the trio who recount their stories, Lawther being the standout as this up-and-coming young actor leaves nothing to chance, turning up the crazy dial to full. He gives it his all and it works wonders.

The saving grace are the horror scenes which work like a depraved charm. The settings are as conventional as you can get: a night watchman at an abandoned factory hearing noises in the dark, a young man driving home at night when his car breaks down in the middle of the woods, and a man taking care of his newborn daughter starts hearing strange noises over the baby monitor. We’ve seen this all before but Nyman and Dyson know exactly how to wring every creepy moment for all its worth, even if a lot of the time it’s the cheapest trick there is. Characters walk into dimly lit rooms, say “Hello?” as the lights start flickering, everything goes quiet then… BAM, loud screeching music and those watching get a quick hit of adrenaline.

Jump scares are to horror what fart jokes are to comedy, a middle-of-the-road tactic that any hack can throw for a cheap reaction. Yet if you know what you’re doing they undeniably work, on the proviso they’re used in moderation and they’re not the only weapon in your arsenal. There are plenty of jump scares here but they’re backed up with good performances and some truly creepy set design and make-up. There’s even a third act revelation that ties the film together, which justifies every conventional set piece we’ve seen in the lead up.

Ghost Stories is in many ways just another average October horror release. An unoriginal jump-scare fest constantly walking the middle of the road between decent horror schlock and cattle prod cinema. If the horror scenes didn’t work so well this would all be a mess but a few genuinely creepy moments and a narrative arch that proves Nyman and Dyson knew what they were doing save it from being thrown in the pile of Halloween release dribble. See it for the three beautifully conducted stories in the centre; spookiness lies within.

Ghost Stories is in cinemas from 25th October through Icon Film Distribution.

Written By
Simon Storey
More from Simon Storey
There was a shower thought from a couple of years ago that...
Read More