Featuring interviews with some of the icons of Britain in the 60s and a soundtrack ripped straight from the collection of Radio Caroline’s record collection, My Generation recounts the decade that changed the world. Lead by the “Godfather” of the generation, the incomparable Michael Caine, the film covers the worlds of music, fashion, photography, film and art to paint a portrait of a generation who were fed up with the status quo and wanted to define their lives on their own terms. 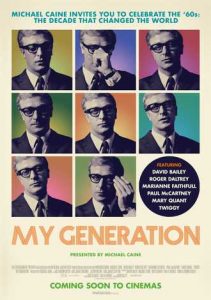 The sheer scope of the British invasion of America, not just The Beatles but Twiggy, David Bailey, and the charming cockney himself Michael Caine, has to be seen to be believed. The chicness of these Brits had Americans fleeing across the pond to the London of Austin Powers, where a night club in an old industrial building was attended at any given moment by rock gods and Vogue cover girls dancing cheek to cheek, where the daring sculptural hair cuts of Vidal Sassoon swished on the heads of women draped in the styles of Mary Quant. In fact the popular Kensington mini-shirt dispensary Biba was the most visited site in the city with many flocking to see the young girls sporting the short skirts.

Inspiring such quotes as “we are here, this is our society, and we’re not going away” and “youth is not a time of life, it’s a state of mind” from the illustrious Mr Caine, the film is a fun walk down a very colourful memory lane. However, as the decade came to a close, and the party seemed to be over, the police began to crack down on the drug use of the rebel few, and thus the decade, and the documentary, draws to a close.

Playing at Palace Cinemas as part of the British Film Festival’s Michael Caine retrospective, My Generation is a fun glimpse behind the curtain of the first generation to be more ambitious, more educated, more employable, and to have a longer life expectancy than their parents. A lot of what came after has somewhat irreversibly destroyed the planet for the rest of us, but it sure was fun while it lasted.

My Generation screens as part of the British Film Festival from 25th October to 14th November. Session times can be found here.