Ukrainian film and documentary maker Sergei Loznitsa blends his talent for fact and fiction in his latest work. Donbass, taking its name from the Eastern Ukrainian region on the border with Russia, is somewhere between an absurdest comedy and an artistic exploration of the way that the war waged since 2014 between the Ukrainian armed forces and the Russian backed separatists has leaked into every facet of society.

Thirteen separate stories make up this tale, each of them poised on the knife edge between horror and comedy. A comedic scene of soldiers sitting on a tank playing tricks on a journalist who asked “Who’s in charge here?” by continually pointing to the man next to them and saying “Me?! I thought he was in charge!” is followed by a confronting scene where a handcuffed soldier with a sign around his neck reading “Volunteer soldier in the Punitive Batallion” is handcuffed to a lamppost and left at the mercy of the angry mob who quickly start throwing punches. The audience is kept on their toes, never knowing if we’re about to laugh or look on with horror at the spectacle that the war has reduced this society to. 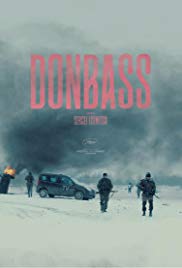 Loznitsa won Best Director at Un Certain Regard during Cannes last year. Teaming up with his longtime camera man Oleg Mutu, who worked with him on 2012’s In the Fog, the pair know how to ring every nuance out of the camera. Many scenes are long takes, where the camera is in constant motion as it fixates on the tiny details and unique people that this region has birthed. There’s the distinct feel of Eastern European filmmaking; nothing is rushed and there’s an overarching sense of stoicism, as it isn’t afraid of exploring the darker sides of the human soul. Crowds seem to be a constant feature, and as the war pushes the different factions further apart mob mentality can be as insidiously dangerous as any war machine.

The mixing of horror and absurdist black comedy seems to share DNA with Austerlitz, Loznitsa’s observational documentary from 2016. Whilst Donbass uses actors to explore its ideas Austerlitz simply put the camera down and let humanity do the work, being a collection of single take videos from modern day Auschwitz depicting the often jaw-dropping behaviour of visitors to the site. Like the teenagers queuing up in front of the ‘Arbeit macht frei’ sign to take selfies in front of it while doing duck-face or the couple who decided it was a good idea to start making out in front of the ruins of the crematoria. Loznitsa is clearly fascinated with humanity’s failings and the varied reaction to them, and being Ukrainian he certainly comes from a society that knows better than most about civilisation’s failings.

While it’s difficult to make sense of some of the more unusual scenes, Donbass confirms Loznitsa as one of the most prolific filmmakers of Eastern Europe. The War in Ukraine is a rare topic of conversation in Australia, apart from the accountability of MH17, but it’s brought to life in this bizarre and often thought provoking art piece. Like a lot of films from the East the audience has to do a lot of the work; reflection and research is key to finding the depths of this unique film.

Donbass is in cinemas from 18th October through The Backlot Films.