Before this review properly starts, a Public Service Announcement for the filmgoing community. Do not – under any circumstances – watch the trailer for Jirga, as it’s the absolute worst kind that gives away the entire plot, every major story beat and important things the film wants to keep secret. For those who’ve seen the trailer, you’ve essentially seen the film. For everyone else, don’t worry, there’s still hope for you to see this beautifully shot and constantly compelling Australian film unsullied.

Part time filmmaker and part time paramedic Benjamin Gilmore serves as both writer and director on his latest feature since Son of a Lion. Shot on location in Afghanistan we start in Kabul, a city hugged by snowcapped mountains and where military helicopters are a constant feature on the horizon. This is the story of Mike (Sam Smith) who has traveled to this ancient land in search of someone. We’re not quite sure who this person is, but it’s clear that they have some sinister unresolved conflict that stems from Mike’s time in the army. As he travels to a part of the country still under the control of the fractured remains of the Taliban he becomes caught in a web of escalating danger, as his journey pushes him to a small village and at the mercy of the town’s elder council.

A court of tribal elders is called a ‘Jirga’ . In Middle Eastern culture, Afghanistan especially, it’s the name given for the time when the village elders come together to debate important issues in the community. It’s an interesting tradition, one of the many great touches of local culture that Gilmore has managed to capture on screen. The circumstances of the fascinating shoot have leaked into the feel of the film itself. Production was originally going to happen in Pakistan, but after the shoot was blocked by the Pakistan military various financiers pulled support. As a result Gilmore took a chance and shot guerrilla style in Afghanistan, with the cast and crew constantly aware that they could have fallen victim to kidnapping or sporadic violence. 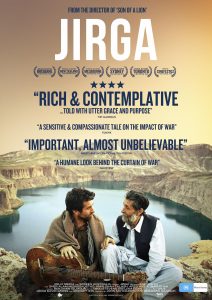 Sam Smith, mostly known for a role on Home and Away, manages to hold the film together just by physicality. He’s in every scene and rarely speaks but makes the character work with a sullen gaze and a nihilistic determination to march into danger. Whatever caused the crushing shame that lurks behind his eyes clearly hasn’t been resolved. It couldn’t have been the easiest shoot but Smith and Gilmore have made a very respectable feature out of it.

The true star is Afghanistan itself. Gorgeous photography – shot by Gilmore on a camera he bought from a Pakistan shopping mall – shows off this arid landscape in all its unique beauty. Rolling sandstone mountains and roads barely held together seem to make up most of this region. It manages, just like the Australian outback, to be both desolate and alluring at the same time. It’s a testament to the Afghan people – many of whom appear in roles, which lends a raw sense of realism – that they have lived on this unforgiving land for millennia.

For those of us in the developed world who have lifestyles unrecognisable to Afghan locals, the occupation of Afghanistan and the War on Terror is rarely more than glimpsed through news bulletins or occasionally discussed over dinner. For the poor souls living in this region the war and its ramifications are all too real. Jirga is a film unafraid of making a firm and sharp statement about the longest war in Australian history*, and having shot various films and spent a lot of time in the region, Gilmore is more qualified than most to make such an assertion. However, the portrayal of the Taliban as being reasonable and not as bad as they first seem might raise a few eyebrows.

Visually stunning and with the conviction to make a statement not many want to hear, Jirga is a compelling and ultimately rewarding slice of audacious Australian filmmaking that shouldn’t be overlooked.

* Afghanistan is considered the longest formal war that Australia has been involved in. But if we consider that the colonies informally fought the various Indigenous populations in Australia’s Frontier Wars that lasted the entirety of the 19th Century, many would consider this to be Australia’s longest war.

Jirga is in cinemas from 27th September through Footprint Films.