Nobody may have asked Johnny English to strike again, but his return to cinemas – along with the reappearance of comic legend Rowan Atkinson – isn’t necessarily unwelcome. After all, it’s been two years since we last saw Jason Bourne, and three years since we got our most recent Bond flick; surely the absence of a spy hero has made cinema fans’ hearts grow fonder.

David Kerr’s Johnny English Strikes Again is the third instalment in a highly unnecessary fifteen year trilogy, but thankfully remembering the first two chapters is not a prerequisite. In the early scenes, we relearn that Johnny English is a bumbling yet effective English spy coming out of retirement to help the United Kingdom at a time of great need. With a hacker exposing the names of all British spies and causing chaos throughout London, it’s down to English to save the day. In short, Strikes Again is a bit like the 2003 original, if your memory serves you well, but with a sprinkling of 2018 cybercrime to keep things relevant.

Writer William Davies’ efforts to modernise itself with a plot about internet hacking, Silicon Valley billionaires, and information security are a tad hackneyed and will leave the film with a short use-by-date. One also suspects that young kids in the audience will be able to see through the film’s desperate attempts to fit in with the zeitgeist. But to judge Johnny English on its plot would be like judging professional sportspeople on their music taste; it’s an irrelevant metric and a distraction from the main game. 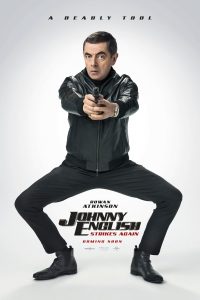 Rather than its storyline, Johnny English should be judged for its ability to deliver good sketch comedy, which it is able to do with enough regularity to keep things lively and entertaining. Nothing tops this quite like a five minute sequence midway through the film in which the title character thinks he’s using a virtual reality headset. The scene is Atkinson at his best, reminding audiences why he is still the king of slapstick humour. And even if the other 95 minutes don’t quite leave you in stitches, it’s still nice to have Atkinson and his unique physicality back on display and in front of a new audience.

Arguably the film is one or two of these sketches short of being worth a re-watch when the DVD comes out (a few episodes of Mr Bean might be preferable), but the film’s final act is as funny as it is satisfying, indicative of a surprisingly well-structured film.

Johnny English is no 007, let alone Austin Powers, but he’s possibly the wholesome family hero we didn’t realise we wanted back.

Johnny English Strikes Again is in cinemas from 20th September through Universal Pictures.