Normally when I go to see a film I clear my mind. Try to go in without any expectations, good or bad. Try to take the film as it is. But I’ll be honest. I really wanted to love The Predator. For me the 1987 original is an almost perfect piece of Hollywood film making. Just the right mix of horror, sci-fi, and action. Pure, fast, and vividly shot by one of the great action directors: John McTiernan. After numerous weak sequels/spin-offs, the chance to see it back on the big screen from a writer and director of Shane Black’s calibre was irresistible.

The omens looked good. The first three feature films from Black (one of the cast of the original Predator) have ranged from good (Iron Man 3), to very good (Kiss Kiss Bang Bang), to excellent (The Nice Guys). He wrote the script, got a gore-friendly rating, free reign from the studio, and assembled a strong cast including Trevante Rhodes (Moonlight), Boyd Holbrook (Logan), Sterling K. Brown (Black Panther), and Jacob Tremblay (Room).

The film begins with a mirror opening to the original, Henry Jackman playing off Alan Silvestri’s iconic theme. A spaceship flies through the stars and down through Earth’s atmosphere. But this time it’s being pursued by another ship. The escape pod ejects and crash lands in Central America – right on top of a group of American black-ops soldiers. Sniper and squad leader McKenna (Holbrook) finds weapons and armour in the wreckage, stashing them in his pack as evidence of the crazy event. After a fight that leaves his squad dead and the predator wounded, McKenna escapes to send the technology back to the US before a government clean-up crew arrives. The rest of the film follows three plot threads: a biologist (Olivia Munn) is taken to a secret government base to work on the captured alien; McKenna’s son Rory (Tremblay) accidentally receives and opens the package of alien technology; and McKenna is picked up by the government and carted off to the base with a bunch of other ‘mentally unstable’ military prisoners. But when the predator soon escapes – of course – it’s not the only one doing the hunting. 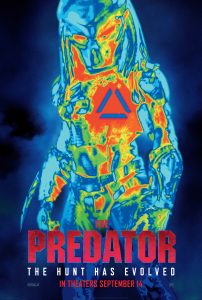 But unfortunately Black can’t make this one work. His trademark smart alec dialogue zips and fizzes but the contrivance-filled story is equally all over the place. It jumps around a lot, and feels like much has been cut or reshot. The action scenes have gore but no panache. There’s none of the gloriously chaotic action choreography that was on show in The Nice Guys. There’s no stand-out, memorable set-piece, no truly wow moment, and the third act is especially disappointing. Unlike the original, there’s little mystery, little fear, and even less tension. Everything’s just too out in the open, too explained, too clean. This is a monster movie that’s not afraid to show its creature, but a horrifying shape in the dark is much less frightening with a light shone on it. The magic trick is ruined when it’s explained (and man, is there a lot of convoluted, unnecessary explaining, about splicing, evolution, climate change and so on).

Black tries to navigate between playing with genre tropes, giving nods to previous installments, and bringing something new. As one of the key screenwriters of the original’s genre and time it’s understandable that he has stuck close to their touchstones. He’s gone back to a rag-tag group of military main characters. He’s run with the cliche of the super secret government organisation with an underground base, complete with robotic lady voice that says things like “Warning. Incoming” and “Decontamination complete”. He has built around the trope of the smart outcast kid who’s the key to understanding the aliens. But in doing this it feels like he’s missed the something new, an opportunity to do anything he wanted, something different.

The cast are all adept at shooting off Black’s dialogue, but a lot of the jokes fall as flat as the depth of their characterisations. Munn is wasted as the film comes to a climax and they should have swapped the roles of Holbrook and Rhodes – the Moonlight star grabs your attention and deserves to be front and centre of the next film he’s in.

Despite the promise of its individual ingredients – the talented cast, the writing potential of Black, the pure action-movie joy of seeing this iconic creature up on screen – The Predator fails to be as good as it could have been. Lower your expectations and there’s still great moments of fun to be had here, but this is like a handgun to the original’s laser cannon.

The Predator is in cinemas from 13th September through 20th Century Fox.