Based on the book of the same name by Darcey Bell, A Simple Favour sees Stephanie Smothers (Anna Kendrick), a mummy blogger, trying to raise her young son (Joshua Satine) on her own while keeping up an Energiser bunny-like enthusiasm. Despite her willingness to get involved she hasn’t made many friends, and quickly becomes enamoured by one of the other mothers, the mysterious Emily Nelson (Blake Lively). After sharing a series of playdates where they drink cocktails and exchange secrets, Emily asks Stephanie for a simple favour while her husband (Henry Golding) is away: to pick up her son (Ian Ho) from school. A few days later, there’s still no sign of Emily.

Since Gillian Flynn wowed readers with her novel Gone Girl in 2012, writers have scampered to cash in on the public’s appetite for such stories. It seems every month there’s a new book being touted as the latest must-read for Gone Girl fans. And all power to them – it’s a winning formula. But can you ever really top the original?

It seems inevitable that any good book should get a film adaptation, and not only did Gillian Flynn deliver a sensational novel, but she adapted it into an incredible film with director extraordinaire, David Fincher, at the helm. So now the question is, can Paul Feig –  a director known almost exclusively for comedy (Bridesmaids, The Heat, Spy, Ghostbusters) – pull off the same magic with screenwriter Jessica Sharzer? 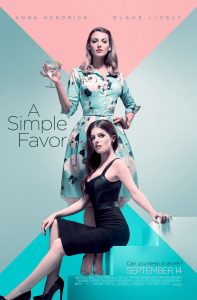 He does better than you might expect, and he does it with flair. In contrast to Fincher’s dark and muted tones, A Simple Favour pops with colour, not to mention Blake Lively’s costumes which are utterly divine. You could call A Simple Favour ‘Gone Girl Lite’, but that’s really only in terms of its colour palette and casting choices which will surely appeal to younger audiences (meaning early twenties). The characters are definitely still as messed up in terms of the narrative, although in some ways it does seem to steal directly from Gone Girl, with one unsettling scene almost identical in terms of its undertones and the moment of realisation for the protagonist. Nevertheless, it’s still a hell of a ride and just as intriguing. You might even say that its only flaw is that it didn’t come first.

Feig being Feig does inject a little humour into the film and it makes the viewing experience fun, to the point where the film does border on satire. A moment near the very end may disappoint some viewers, but for reasons that anyone who knows me well enough will understand, I actually kind of loved it. When it’s not poking fun, it teases with a narrative that while on the one hand, can seem predictable at times, also takes various twists and turns. Is this another Single White Female? Did the husband do it? Is Emily just as messed up as Amazing Amy? Only time will tell.

Anna Kendrick and Blake Lively may not be considered as being in the same league as the other darlings of current cinema (your Jennifer Lawrences, Emma Stones and Natalie Portmans) – and yes, they’re somewhat typecast here – but together they make a formidable pair that are wonderful to watch. While Kendrick starts off doing her neurotic schtick once again, her character develops into a meatier one, and she gets to show off a greater range than what we’re used to seeing. Lively is quite simply perfection personified in terms of her beauty, but she’s also excellent in her role as the enigmatic Emily who you can easily love and hate all at once. Henry Golding pops up again after his first feature role in last month’s Crazy Rich Asians and he’s fine (damn fine, in fact) but he doesn’t have a patch on the ladies. The kids are, however, adorable.

The screenplay does get a bit ridiculous in the later stages of the film, and whether that’s due to the source material or screenwriter Jessica Sharzer (responsible for that woeful Dirty Dancing remake) is unclear without having read the book. For some, it may be all too much; for others it may elevate the film to even greater heights. If you’re one of the few who hasn’t yet devoured Gone Girl in either book or film form, A Simple Favour may be a revelation. But ultimately it’s been done before and done better.

A Simple Favour is in cinemas from 13th September through Roadshow Films.