It was suggested before seeing Domestique, the debut film from Czech writer-director Adam Sedlák, that a hug would be a fitting consolation at the end. I was glad to have the warning. After enduring this cloistered tale of escalating madness to its final retch, a hug and a bath would have been most welcome. You might even imagine watching this film, true to its cycling subject matter, to be comparable to a Pyrenean climb: little promise of relief, whole-body tension and steadily growing queasiness. Repulsive or admirable? It’s both and a bold choice to introduce the Czech and Slovak Film Festival.

It centres on the relationship of Roman (Jiří Konvalinka) and Charlotte (Tereza Hofová), two goal-oriented people whose clockwork lifestyles might not be as compatible as they had hoped. Roman is a manic cyclist training for a spot on a professional team; Charlotte is trying to have a baby. On face value the possibility of achieving both doesn’t seem too much of a stretch, but that is presuming a scenario involving an intimate relationship. They have been together for a while, and as we join them their connection seems to be based more on routine than genuine affection. Both are obsessed with improving themselves to an end: training, self-medicating, dieting. But they are very different ends.

So rarely do we get glimpses of their social lives beyond the apartment walls, we presume them not to exist. Charlotte is spied smoking, going for a run; Roman’s life is a straight line between the exercise bike and the team doctor’s office, where he is advised how he is going to lose the weight required to get on the team. The apartment becomes then a sort of incubator for the growing seeds of unrest and claustrophobia that are sewn when Roman is ordered back to solo training, feelings made even more acute when Roman introduces an oxygen tent into the bedroom. It’s for high-altitude training, and Charlotte is unimpressed; what of her dreams? 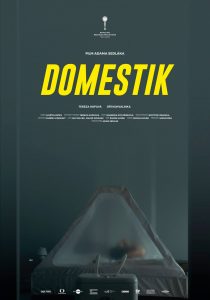 Body-horror at its most intense, Domestique packs a punch thanks to not just the all-in performances of the two leads but also Sedlák’s uncompromising flair in exposing some challenging themes with sweaty voyeuristic detail. He is a talent to watch. It’s not just a critique of professional cycling and its disturbing branch of pseudoscience. Body goals, female subjugation, domestic abuse, control — all of these issues are followed unerringly to their desperate conclusions. It can be grim, but in a film that starts with a Lance Armstrong quote (‘When it comes to performance and body weight, the most important piece of equipment is the scale’) you know the people taking that advice are not destined for love and adoration. Soon a pale Roman is dragging Charlotte along for the ride.

It would be easy to look away from all the aggression, needles, lost fingernails and clammy skin to come, but the title is a handy clue to at least an attempt at interpreting. The term ‘domestique’ refers to a team cyclist who rides not to win but merely to assist the team and its leader. As a fringe member of the team, Roman is in a vulnerable position that invokes a desperation in him to do more, to train harder, to force himself to be his own leader. But doing this has its blind spots, one being Charlotte, who is resigned to a kind of domestique role herself, a concept that is historically all too familiar but no less troubling for the fact her ‘team leader’ is clearly deranged. In fact Roman neatly, if painfully, sums up his priorities in one post-coital chat when he laments that he is unable to be pregnant himself because the hormones that pregnancy creates might be handy on a race day. Mate, read the room.

Even in turning the self-health industry into a horror show, this is a story of how supposedly safe domestic environments can quickly become abusive ones, whether by force or neglect, and the illusion of control has a large part to play. Sedlák‘s willingness to tackle these themes in his startling and bold debut is commendable and effective to a point. But if there was one qualm, it would be to point out that inciting a reaction is one thing; getting a conversation started is another. Domestique is thoughtful and thought-provoking, but as it drags into the final half hour the experience can morph into something a little soulless.

Domestique screens as part of the Czech and Slovak Film Festival which runs from 12th to 26th September. See here for further information.